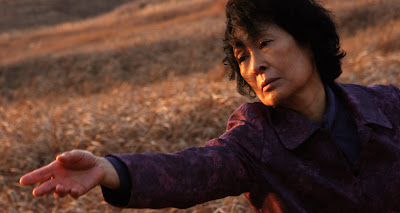 The opening sequence of Mother highlights everything there is to love about the film. The film begins with the mother (Hye-ja Kim) as she walks in a field and breaks out in a dance. Her mash-up dance routine is strange, random, and rather unintelligible; yet, it is also fascinating. Mother thus begins with questions: Why is she dancing? Is she crazy? Is she celebrating? The dance also seems to give her a perverse pleasure, but in its ambiguity, it is also extremely pleasing to watch thanks to Hye-ja Kim's performance. Furthermore, the dance sequence is also an aesthetically satisfying scene: the golden waves of the field contrast sharply with the dull blue-grey tones of the background landscape, and the mother stands out in her red and purple wardrobe. Beginning with this scene, the strength of the film comes from an active force of sense making from the viewer, which is required throughout.
At the most basic level, Mother is a murder mystery. One night, her son, Do-joon (Bin Wan), goes out for drinks with friends and follows a girl home on his way back from the bar. The next day, the girl, Moon Ah-jung, is found dead. Her body is vulgarly displayed atop her roof, and the only evidence at the scene incriminates Do-joon. Do-joon is quickly arrested for the murder. Mostly due to his state of intoxication, Do-joon cannot recall what happened the night of the murder. Do-joon is also mentally challenged and suffers from memory blocks. This causes Do-joon to comply with the police’s version of events and he confesses to the murder. Upon hearing of this confession, Do-joon’s mother refuses to believe that her son is capable of murder and seeks to clear his name. When the police inform her that they consider Do-joon’s case officially closed, she embarks on her own investigation. 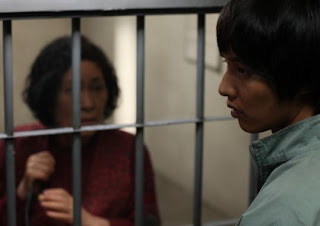 The mother’s inquiry leads to all sorts of loose ends and red herrings. However, her case gains momentum as she discovers that Moon Ah-jung had sordid relationships with an assortment of men. This all makes for an intriguing and wholly unpredictable mystery. Additionally, the mystery is mirrored in the form of the film. Like the opening dance sequence, there are many bizarre characters, arresting visual elements, and peculiar scenes that require a detective’s intuition in order to decode the mother’s journey.
Furthermore, her need to clear Do-joon’s name becomes more urgent as realizes her own complicity in his guilt. As she tells him during one visit to the prison, “You and me are one.” Instead of being a violent criminal, Do-joon may just be the victim of over-parenting. Once the mother realizes her culpability, her investigation soon becomes a perverse odyssey akin to that of David Lynch’s Blue Velvet. In fact, there’s actually a scene reminiscent of that in which Blue Velvet’s Jeffrey (Kyle MacLachlan) hides in a closet and watches Dorothy (Isabella Rossellini) and Frank (Dennis Hopper) have sex. Moreover, in Blue Velvet, Frank gets off by telling Dorothy, “Daddy wants to fuck,” and Mother features many scenes in which Do-joon tells people that he and his mother sleep together, although he doesn’t understand the sexual connotation of “sleeping together”, as the mother and son just share a bed. 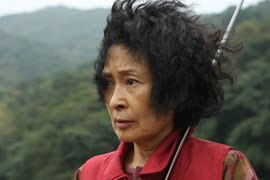 The complexity of the mother-son relationship makes Mother far more fascinating than any Hollywood thriller of recent years. Significantly, Hye-ja Kim’s performance as the committed mother is one of the richest performances this year. Hye-ja Kim is constantly captivating in her portrayal of devotion and guilt, and her ability to communicate the mother’s despair makes a perfect dance partner for director Bong Joon-ho (The Host). Together they make one of the more challenging films of the year, but also one that is most rewarding
Posted by Pat Mullen at 5/29/2010 06:11:00 PM