All on a Mardi Gras Day

Treme \tr'ə-mā\ n 1. A borough of the Mid-City district area of New Orleans. 2. An HBO drama series from Eric Overmeyer and David Simon, co-creator of The Wire 3. The best new show on television. 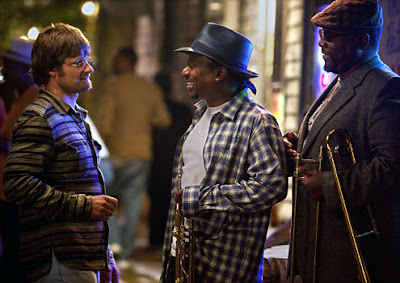 This Sunday marks the season finale of Treme, which is easily the best new show on television. Treme takes place in New Orleans in the early months after the devastation of Hurricane Katrina. The series follows several residents of the Treme, one of the more ravaged areas of the city, as they return home and rebuild their lives.

One storyline depicts Janette (Deadwood's Kim Dickens) an acclaimed chef whose house and restaurant were all but gutted by Katrina. To pick herself up, Janette puts all her resources into reviving her once successful restaurant. Although her bistro is often filled to capacity with diners who rave about the food, Janette is so in debt from Katrina that she can barely afford to pay her suppliers, let alone her staff. To worsen her circumstances, Janette leaves her restaurant only to return to a home that is little more than exposed two-by-fours and wires. While Janette is continually beat-down by the hard times of New Orleans, her casual boyfriend Davis (Steve Zahn) is fed up with the government’s lack of response and begins a farcical bid for city council. Enlisting the equally impatient citizens of his constituency, Davis runs a “Davis Can Save Us” campaign by recording a new spin of “Shame, Shame, Shame” that articulates the frustration of New Orleansians. Not surprisingly, the song catches on. 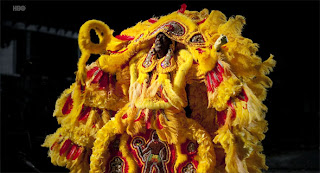 Creighton Bernette (John Goodman) also starts a grassroots battle by recording a series of expletive-laden tirades against the Bush administration. Creighton also struggles to complete his novel about the Mississippi Flood on the 1920’s and although he started writing before the hurricane, he feels that finishing the novel would be like exploiting the current situation. In an attempt to overcome his writer’s block, he laments for the days of New Orleans-past and teaches his daughter, Sofia, to treasure her roots. Likewise, Albert (Clarke Peters of The Wire) is a Creole chief fighting to preserve the cultural heritage of his tribe. Albert’s situation is a little more complicated: many of his people dispersed during the storm and they are unable to return because the local and federal governments refuse to reopen the housing projects that have been condemned, despite being some of the few buildings in the area to sustain little damage. Albert thus begins a solid effort to bring his people home, and he encourages his tribesmen to assert their presence in the Treme. As Albert, Peters’s unwavering intensity and passion is one of the show’s many highlights. 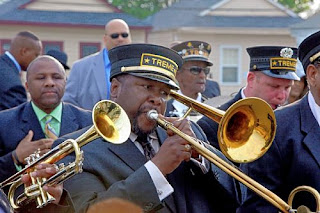 While noting one of Treme’s stand-out qualities, it would be impossible to continue without mentioning the music of Treme. Treme unquestionably has the best soundtrack of any show currently on TV. Despite being one of the more distressed areas of New Orleans, the Treme thrives due to its rich musical culture. Many of the characters on Treme are professional or amateur musicians, so Treme has many groovy, soulful, and exuberant jazz sessions, each of which delivers some cultural flavor of New Orleans into the series. In addition to Davis, who is/was a radio DJ, there’s Antoine Batiste, played by The Wire alum Wendell Pierce, who, like Zahn, is another asset of the ensemble cast (actually, everyone in the cast is good). Antoine is a local tromboner who supports his family by hopping from one gin joint to the next, and if he’s not there for a gig, he’s there enjoying a show. There are also the young musicians Annie and Sonny, played by Lucia Micarelli and Michiel Huisman, who are both a couple and a busking duo. Annie is a brilliant violinist who’s getting noticed by several of the more seasoned local talents, but her efforts are often brought down by Sonny’s dependency on drugs and alcohol. 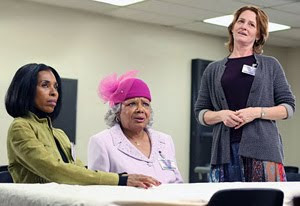 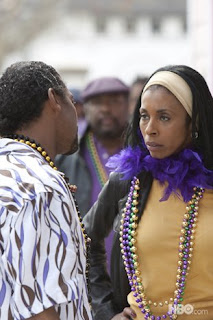 Rounding out the ensemble is a powerful narrative featuring Antoine’s ex-wife, LaDonna, played by Khandi Alexander. LaDonna is searching for her brother who was in prison when Katrina hit and he has since been unaccounted for. With the help of Creighton’s wife Toni (a wonderful Melissa Leo), who is a lawyer, LaDonna’s case uncovers a system that left many of its citizens helpless during the storm and made little effort to reconnect them with their families. Alexander gives the standout performance of the show – her blend of sass and exasperation make LaDonna a compelling character and a feisty protagonist. Furthermore, the range of material granted to Alexander demonstrates the elevated quality of HBO’s programming over that of other networks. Alexander last appeared on CBS’s CSI: Miami, where her work was mostly reduced to one-liners and the sunglasses on/ sunglasses off range of acting. Additionally, one episode of Treme offers Alexander (and all the actors) more room to express themselves and flesh out characters who feel more like real people and less like character types. One of the most devastating moments of Treme occurs when a distraught LaDonna bends over in grief and observes a series of transport trucks that are filled with the unclaimed bodies of storm victims. It’s a powerful moment that situates the series within the collective loss of New Orleans. 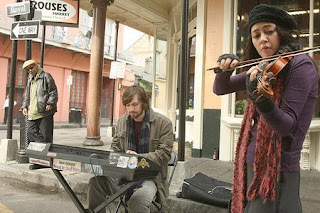 Treme is co-created by David Simon, who also co-created the HBO series The Wire. Like The Wire, Treme has the rarity of being a TV series that is actually about something. While The Wire successfully examined the drug scene in Baltimore (and America), Treme offers a damning look at how many Americans dropped the ball when the time came to help their own. Much of the poignancy stems from how timely the show is, but it also benefits from how some of the stories in Treme are universal. For example, when Albert fights to reopen the projects in his neighborhood, the federal government’s reluctance to help the more peripheral members of the community is a telling and all too familiar story. Much like how deeply The Wire explored the scenario of the characters and their situation, Treme offers such a complex portrait of people and their environment that it almost seems like sociological television. 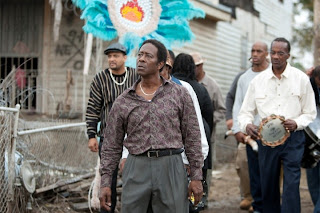 Furthermore, although it frequently depicts both citizens and tourists enjoying rowdy celebrations on Bourbon Street, indulging in the local cuisine, or having an impromptu jam session, Treme never romanticizes New Orleans. Rather, it suggests that much of the appeal of New Orleans comes at the expense of local entrepreneurs and musicians who strain to make ends meet. More importantly, it depicts a shared effort to maintain the identity of one of the most culturally distinct cities in America. The strongest example of the ignorance of other people with regards to the aftermath of Hurricane Katrina comes in the third episode of the season: Albert and his friends find a body of one of their neighbors while sifting through the wreckage of a house. The group then decides to hold a Creole funeral in front of the house, and in the middle of their ceremony, a tour bus slowly drives through the neighborhood, offering people a glimpse of the remains. As the tourists gawk and take photos of the chanting group, Albert tells off the bus driver, and the episode fades out as the bus drives away and the bewildered mourners are too stunned to continue their ceremony.
Treme ultimately succeeds because it blends the important message of the show within an hour of genuinely entertaining television. At no point does Treme ever feel like a lecture on morality. Instead, it’s a toe-tapping and soul-stirring piece of American realism.
Treme ends Sunday night at 10 on The Movie Network/HBO Canada. The season replays starting June 29 at 6:00 PM.
Posted by Pat Mullen at 6/15/2010 08:18:00 PM