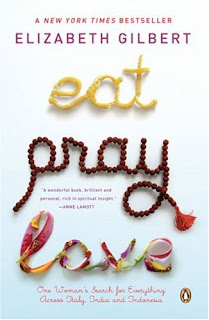 Imagine yourself in a park. It’s a beautiful green oasis full of flowers and trees. It’s a warm 22 degrees and a nice breeze is blowing in from the pond. Now imagine that you are meditating in this park. As the peacefulness engulfs you, you slip into an early state of tranquility and your body relaxes. Now imagine that your serenity is interrupted by a crew of jackhammers working in the adjacent roadway. Despite the disturbance, you try to ease back into your state of inner harmony. Although you breathe deeply and count backwards from ten, you find yourself unable to regain your bliss because of the incessant intrusions, which reverberate in your head long after they’ve stopped.
Such is the task of enjoying Elizabeth Gilbert’s spiritual memoir Eat, Pray, Love: One Woman’s Search for Everything Across Italy, India, and Indonesia. In Eat, Pray, Love, Gilbert recounts her one-year voyage of self-discovery. Gilbert had consecutive four-month visits to Italy, India, and Indonesia – or, as Gilbert astutely (and ominously) dubs, “the three I’s.” While regaling us with her newfound path to enlightenment, Gilbert basically takes a cue from Malibu Stacy and advises us to just forget all our troubles with a nice big bowl of strawberry ice cream – sorry, gelato.


Gilbert embarks on this journey following a dark period in her life. During that time, Gilbert extricated herself from a failed marriage and then threw herself into a one-year puppy-love relationship that also ended terribly. Gilbert describes the moment in which she decided to take control of her life as a brief epiphany during a late night sob session on the bathroom floor. Gilbert writes that she heard the voice of God, which she describes as the sound of her own voice, and it gave her the strength to pick herself up and get herself back together by feeding her passion for travel. 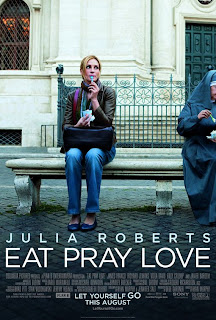 Gilbert begins by flying to Italy and settling herself in Rome. In Rome, she studies Italian and lifts her spirits by indulging in the local cuisine. Gilbert also befriends several travelers and Italian citizens, including one Roman who, ironically, is named Luca Spaghetti.

After four months in Italy, Gilbert flies to India and takes up residence in an Ashram where she participates in extensive yoga and meditation sessions. At the Ashram, Gilbert has an amicable relationship with a boorish Texan named Richard. Richard, along with the other yogis, helps Gilbert reach new heights of acceptance, relaxation, and clarity.

Four months later, Gilbert goes to Bali, Indonesia. In Bali, she works with an elderly medicine man who, during Gilbert's previous trip to Bali, had foretold of her breakdown and subsequent recovery. Gilbert also makes friends with a poor Balinese single mother and her children, and she reluctantly makes another attempt at romance with a charming Brazilian man named Felipe


During her travels, Gilbert undergoes a radical transformation and she emerges a spiritually enlightened woman who is at peace with herself and the world. Unfortunately, all the wonderful qualities of Eat, Pray, Love are frequently undermined by Gilbert’s unrelenting whininess and her over-inflated ego. From the first pages of her memoir, Gilbert blathers on about how she’s so hard done by. Gilbert is especially vehement when mentioning her ex-husband (but to her credit, it sounds like they had a nasty divorce); furthermore, aside from noting that he wanted children and she did not, she openly glosses over her reasons for leaving him, so her continual remarks about how much he suffocated her often sound more mean-spirited than meaningful. It’s equally disparaging how Gilbert shows little remorse for leaving her marriage, but she falls to pieces when her rebound relationship fails. Additionally, it is quite unflattering and problematic how Gilbert unabashedly describes herself as a worldly person, yet she cries over boy problems like a thirteen-year-old girl. Even more frustrating is Gilbert’s ego. When Gilbert isn’t crying about losing David, her one-year boy toy, she’s banging her own drum. Even when Gilbert shares the lessons of her spirituality, she often undermines it by delivering it in a condescending I am holier than thou didacticism. 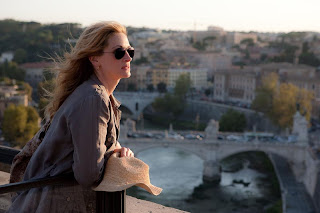 Despite Gilbert’s frequent bouts of narcissism (and trust me, there are many), there is a lot to admire about Eat, Pray, Love. Gilbert has an astonishing ability to articulate her euphoria and she has a real knack for observing the smallest details that afford pleasure while traveling. She also offers valuable lessons about self-love, including how the best thing one can do is to indulge in life’s basic rewards, noting that “the appreciation of pleasure can be the anchor to one’s humanity.” Gilbert also demonstrates her knowledge through an intelligent semantic breakdown of the word Guru, in which she explains how the word literally identifies a person who has moved out of the darkness and into the light. In this sense, it is necessary for Gilbert to include details of her dark days, but it would have been more rewarding if she didn't continually look back in anger at her previous failures. 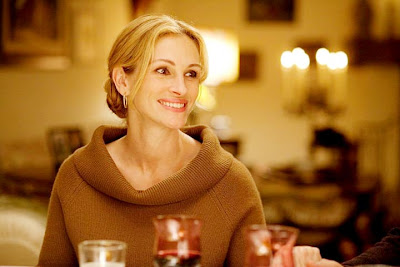 Fortunately, that can be remedied in the film. If the filmmakers are smart enough to knock Gilbert off her pedestal, Eat, Pray, Love could easily be the feel good movie of the year. Most of the success relies upon the casting of Julia Roberts as Elizabeth Gilbert. Roberts is a strong candidate for the role because she has an infectious likability, and her charm should easily encapsulate the more positive aspects of Gilbert’s memoir. Gilbert actually isn’t an entirely unlikable character herself: when she isn’t tooting her own horn, she’s smart, funny, and extremely charitable 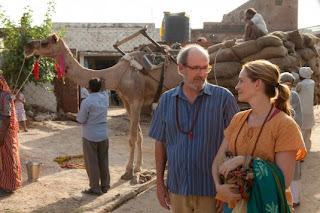 Joining Roberts in the cast is Richard Jenkins (The Visitor) as Richard the Texan, which should make for a fun pairing during the India scenes. Doubt’s Viola Davis plays Gilbert’s American friend, who seems to be all of the girlfriend characters of Eat, Pray, Love collapsed into one. James Franco plays David, while Bill Crudup appears as Gilbert’s ex-husband: the inclusion of his character suggests that the film aspires to repair some of the memoir’s shortcomings, considering that the ex-husband character wasn’t even granted a name, let alone a speaking part. Finally, there’s Javier Bardem as Felipe, who, after Vicky Cristina, Barcelona, seems to be typecast as the foreign romantic interest character.


Eat. Pray, Love is directed by Ryan Murphy, who nearly butchered the film adaptation of Augusten Burroughs’ scathingly funny memoir Running With Scissors. Murphy, however, has had considerable success as the creator of Glee, so hopefully he will imbibe Eat, Pray, Love with the necessary, er, glee  to complement Gilbert’s journey. The gorgeous scenery of Gilbert’s travels will be even prettier through the lens of cinematographer Robert Richardson (Inglourious Basterds), and a score by Dario Marianelli (Atonement) and new songs by Eddie Vedder (Into the Wild) should make for a lively soundtrack. 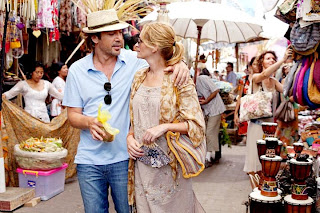 Perhaps it’s just the inclusion of Florence and the Machine, but the sneak peek for Eat, Pray, Love offers a brief sense of the elation that Gilbert failed to conjure up in her memoir. Even if the film includes some of Gilbert’s digressions, they should be tolerable when delivered through Roberts’ big toothy grin. Rather than hammering away at our nerves for two solid hours, it seems that Julia Roberts’ girlish enthusiasm makes Gilbert a welcome travel guru, and Eat, Pray, Love will therefore be a welcome journey during the late Summer months.