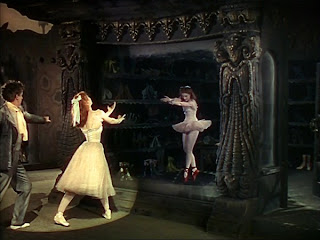 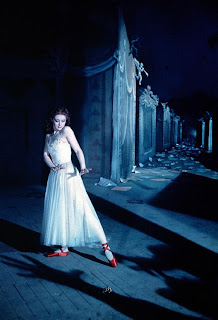 Monday night, I had the pleasure of seeing The Red Shoes for the first time. Directed by Michael Powell and Emeric Pressburger, The Red Shoes is the story of Victoria Page (Moira Shearer), a young ballerina who gains stardom when she lands the lead role in her ballet company’s ambitious new production, a bold re-imagining of Hans Christian Andersen’s story “The Red Shoes”. The ballet is about a girl whose dream of becoming a dancer comes true when a mysterious shoemaker gives her a pair of red ballet slippers. The shoes transform the girl into a brilliant performer, except her fate takes cruel turn when the shoes decide they want to keep dancing and they force the ballerina to dance until her death. The narrative of The Red Shoes plays with Andersen’s fairy tale, as Victoria’s own career is similarly cursed by “The Red Shoes”. Released in 1948, the film was a huge success and a landmark film in terms of British cinema permeating the North American market. The Red Shoes is also noteworthy as an early Technicolor film and its striking color scheme will doubtlessly intoxicate any moviegoer. The centerpiece of the film is the spectacular performance of “The Red Shoes” itself, a silent fifteen-minute ballet sequence. The ballet number features breathtaking visual compositions and innovating editing skills that invest Victoria’s motivation and psychology into her performance. The Red Shoes deserves the legacy it has earned and is truly a must-see for anyone interested in classic cinema.

I caught The Red Shoes as part of the weekly “Must See Cinema” series at the Bytowne Cinema. Located on Rideau Street, the Bytowne is Ottawa’s best place to see movies, as it consistently offers the latest in quality films. They also hold a weekly series, sort of like a Film 101 class without the lectures, where anyone can catch important classic and contemporary films. (The “Must See” series offers anything from Casablanca to Fight Club.) During February and March, the Bytowne had a special series where each week progressively offered the Best Foreign Language Film Oscar winners from the past decade. Although I’d seen almost all of them, the series did allow me to catch one I’d missed: 2002’s winner for Germany, Nowhere in Africa (which was excellent). Other films I’ve seen in the series are Pedro Almodóvar’s All About My Mother (his best film – even better on the big screen) and West Side Story, which was a lot of fun. 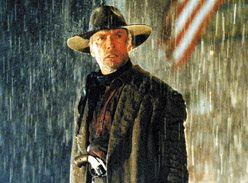 This month’s offerings begin with Clint Eastwood’s Unforgiven. Showing in celebration of Eastwood’s 80th birthday, Unforgiven is one of his finest achievements both behind the camera and in front (it nabbed Eastwood his first Best Picture/Director wins). Also showing is the 70’s cult film Punishment Park, and Lars Von Trier’s Breaking the Waves, which I’m particularly excited to see. The last of the month is Francis Ford Coppola’s Apocalypse Now: Redux. If you have not already seen it, you’d be doing yourself a disservice by not going!

Part of the appeal of seeing these older movies on the big screen is simply the collective enjoyment of a film. Unlike a night spent seeing the latest blockbuster at the multiplex, the “Must See” series is mostly frequented by serious moviegoers, and it is perhaps the one chance in a week where one can go to the movies without needing to shush someone or be distracted by other patrons who concentrate more on their text messages than the movie. Nostalgia is another reason for enjoying the series: there is just something extremely charming about seeing an older movie on the big screen. Finally, the series is a reminder of how much more enjoyable it is to see a movie in the theatre. Especially in the case of films like The Red Shoes, the way the colors leap off the screen creates an experience that simply cannot by replicated in an at-home viewing. If anything, this is the series’ greatest success.
Posted by Pat Mullen at 6/02/2010 01:19:00 PM