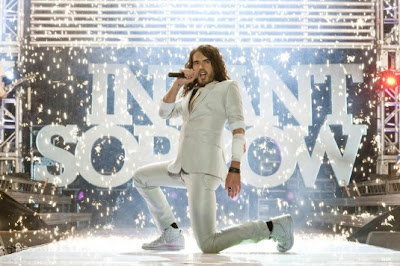 All hail Russell Brand! Not only is the British comedian the best thing about Get Him to the Greek, he promises to be one of the funniest new talents in Hollywood today. Get Him to the Greek opens with a hilarious sequence that introduces Brand’s rocker Aldous Snow as his band, Infant Sorrow, releases a new record called African Child. In the provocative music video for African Child, Snow and his girlfriend, Jackie Q (Rose Byrne), tromp about with malnourished African children in a song for aid. The record is quickly a failure both commercially and critically, with several people calling it the worst thing to happen to Africa since apartheid or AIDS.
The music video sequence, coupled with Snow’s subsequent breakdown and break-up with Jackie, is an extremely funny spoof on celebrity self-indulgence. In an interview with an Entertainment Tonight-type show, Snow refers to himself as “a White African Space Jesus”, and in another, a drunken Jackie pulls a Britney while she trashes their relationship. Brand and Byrne pull off the audacious humor with such deadpan delivery it’s almost scary, and Brand in particular is so fearlessly over the top that his doofus rocker is just about the best thing on the fake music scene since Spinal Tap. 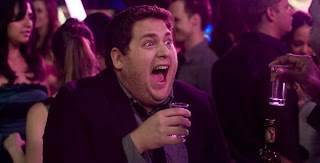 The film jumps ahead to three years after the embarrassment of African Child. Enter Aaron (Jonah Hill), a young intern at a record company in Los Angeles who also happens to be Snow’s biggest fan. Aaron’s boss, Sergio (played by P. Diddy or as he prefers to be called on screen, Sean Combs), needs fresh ideas to keep his company competitive in the recession-era entertainment industry. Aaron suggests that they take advantage of Snow’s slump and book him to perform a live show on the ten-year anniversary of his hit concert at L.A.’s Greek theatre. Sergio agrees and sends Aaron to London with the mission of escorting Snow back to L.A. in time for the performance.
Once Aaron meets up with Snow in London, Snow insists on taking him out on the town. Aaron is quickly swept up in the ‘sex, drugs, and rock and roll’ aspect of Snow’s lifestyle, and the two get epically blitzed before heading back to the USA. To complicate matters, Aaron has also just broken up with his long-term girlfriend Daphne, played by Elisabeth Moss (“Mad Men”). Aaron’s enthusiasm for a career in the music industry begins to wane as his puts up with Snow's diva antics, but the two bond over their failed relationships and have another hard night on the town. 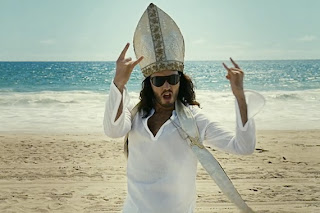