Micmacs, the latest effort from French filmmaker Jean-Pierre Jeunet, is a disappointment if there ever was one. Jeunet’s previous films, Amélie and A Very Long Engagement, were both enchanting features that displayed the director’s trademark peculiarity. Jeunet’s films are all filled with oddball characters and erratic visual motifs, and their originality was much of the films’ charm. In 2001’s Amélie, Amélie is a whimsical heroine with a wandering imagination, so the film benefited from the inclusion of bizarre aesthetics and a strange kinetic energy. Jeunet put similar embellishments on his adaptation of Sébastien Japrisot’s novel A Very Long Engagement and, like Amélie, the film had a quirky extravagant magic that blended well with the story. Micmacs, however, has the same flair for oddities, yet it all has an ugly macabre feel to it. Whereas Amélie’s idiosyncrasies were an essential part of her character, Bazil, the protagonist of Micmacs, seems eccentric just for the sake of it.

Bazil, played by Danny Boon (Bienvenue Chez les Ch’tis), is a lonely clerk who gets shot in the head when a high speed car chase end in an frenzied shootout outside his Parisian video store. During his operation, the doctors are perplexed as to how to operate: if they remove the bullet, Bazil could become the vegetable; if they leave it in, he’ll be fine, but he could die at any moment. The doctors do the most logical thing – they flip a coin and leave it to fate. Bazil is soon discharged and quickly finds himself homeless and unemployed because everyone assumed he was dead. However, the sexy new clerk at his video store conveniently gives him a bullet that was left at the scene, and Bazil vows revenge on the company that left him with a bullet in his brain. Bazil survives by wandering the streets and busking for money, but he is befriended by Slammer, an old man who offers him a home at the landfill of Tire-Larigot. At the landfill, Bazil joins a family of other outsiders who live at the junkyard and survive by revamping discarded treasures into robotic novelties – they’re basically a group of real-life Wall-E’s living on the island of misfit toys. 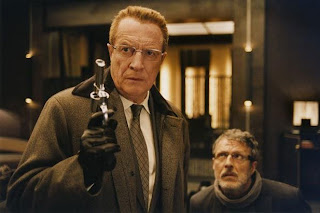 One day, when out collecting junk, Bazil stumbles upon the headquarters of the arms manufacturers. As it turns out, there are two rival arms companies: across the street from the company that made the fateful bullet is the business that made the landmine that killed Bazil’s father. Bazil decides to get even by pinning the competing arms dealers against one another and he enlists his troupe of fellow goofballs to help him get even. What ensues is a series of moderately comical scenarios in which the enemy warlords retaliate against each other because they assume that the other party is to blame for Bazil’s tricks. 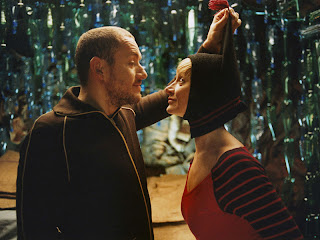 Given Jeunet’s knack for delivering hilarious films that delight in physical and situational comedy, it’s surprising that Bazil’s revenge farce isn’t very funny. The group of actors playing the misfits work quite well together, but their efforts amount to little more than an overdrawn vaudeville act with little payoff. More unexpected is the sense that much of the failure of Micmacs stems from the production qualities of the film. While Jeunet’s previous films, especially Amélie, enhanced the quirkiness of the picture through unique compositions and rapid-fire editing, everything in Micmacs just feels off. It’s almost as if the filmmakers enforced a two-second delay while putting the film together – all the comedic timing feels trained from the film. Furthermore, the film has an archival score by Max Steiner, the great composer behind classic Hollywood films like Casablanca and Gone With the Wind. The inclusion of the score is a mystery, besides the fact that Bazil is watching The Big Sleep right before he is shot. Unfortunately, the music is often overbearing and doesn’t jive well with the rest of the material. Micmacs also includes some other odd film references, particularly several posters around Paris advertising the film Micmacs à tire-larigot, which is the film’s original French title. It’s a strange reference to the characters of the Tire-Larigot junkyard that is never explained.

It’s unfortunate that Jeunet doesn’t deliver with Micmacs, especially since his signature visual flair should have complemented the offbeat nature of Bazil’s dilemma. Micmacs offers a few genuine laughs, but overall, it’s little more than a mildly amusing trifle.