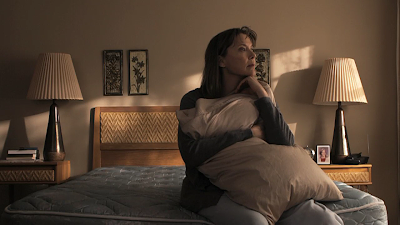 “Blood is important, but it’s the time spent together that really matters,” says Lucy (Kerry Washington) in one of the opening scenes of Mother and Child. Lucy’s statement is repeated again during the film, and the sentiment becomes the constant conflict throughout. Mother and Child follows three women in different states of motherhood and childhood. Karen (Annette Bening) is a physical therapist who lives with her aging mother. There’s a coldness between the two that stems from Karen’s youth: Karen gave birth at fourteen and her mother forced her to give the child up for adoption. The trauma of losing her child has eaten away at Karen throughout the years. She is now a distant and often difficult woman, and she is consumed with guilt for missing out on her daughter’s life. Karen frequently writes letters to her daughter, but cannot bring herself to send them for fear her daughter may be equally bitter. 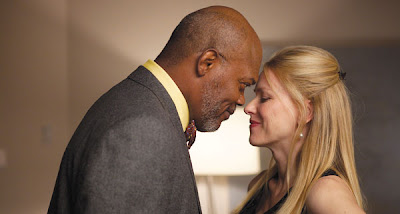 The second narrative follows Elizabeth, played by Naomi Watts. At thirty-seven years old, Elizabeth is a successful lawyer and independent woman. Elizabeth was adopted and states that she had a poor relationship with her adoptive parents. She thus escapes family life by moving from place to place and remaining entirely career driven.
The third story is Lucy’s. Lucy and her husband, Joseph (David Ramsey), are in the process of adopting a child because Lucy is unable to bear one of her own. Despite some concerns from her mother (“Law & Order” star S. Epatha Merkerson), Lucy is obsessed that adopting a child will bring her happiness and begins negotiations for an adoption with a difficult young mother-to-be, played by Shareeka Epps (Half Nelson). 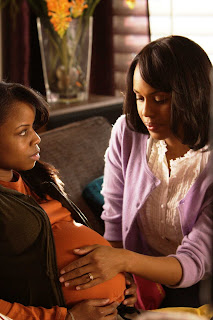 Each relationship is soon complicated by a father figure. Karen begins a strange relationship with a co-worker, Paco (Jimmy Smits), who encourages her to seek out her daughter; Elizabeth initiates an affair with her boss, Paul (Samuel L. Jackson); and Joseph devastates Lucy by telling her that he wants a child of his own. Additionally, each of the three women finds solace in another relationship: Karen takes a liking to her housekeeper’s young daughter, Elizabeth discovers that she is pregnant and is surprisingly optimistic about the prospect, and Lucy gains strength in her determination to be a single mother.
The narratives are mostly independent until the film’s end. However, they frequently parallel one another and are complementary in their depiction of parent-child bonds. Mother and Child is directed by Rodrigo García, whose previous film, Nine Lives, also examined the relationship between mothers and their children. Nines Lives contained nine vignettes, each of which was shot in one long take and the technical achievement added a sense of urgency to his depiction of female Americana. Mother and Child, however, is told primarily through close-ups and medium shots that are methodically spliced together to creature an affecting tale of family living. The static nature of the film helps convey the loneliness of each of the three main characters. The mostly empty frames greatly portray an overwhelming sense of absence in each of the character’s stories, particularly Karen’s.

As Karen, Annette Bening gives the film's strongest performance. Bening is frequently offered quiet introspective moments in which her fragile facial expressions communicate Karen’s emotional isolation: the scene in which she briefly hugs a pillow following her mother’s death is devastating. Naomi Watts is fiery as Elizabeth, whose free nature often expresses itself sexually. Her first sex-scene with Jackson is completely void of emotion and Elizabeth’s provocatively conservative black dress gives her a dominatrix-like quality. As Lucy, Washington gets the most emotionally expressive part, yet she never pushes too far into histrionics, even though Lucy can rarely contain her emotions. Mother and Child finds most of its success in the strength of its ensemble cast. Samuel L. Jackson is particularly good in his understated work as Paul – it’s a nice break from the comic book and action movies Jackson’s being doing lately. Merkerson and "24"’s Cherry Jones also give superior work in their supporting roles.

Mother and Child is at times almost too overbearing in its ability to emote despair and thus veers close to being too depressing for its own good. Nonetheless, the film’s ability to do so is a testament to the strengths of its actors and its storytelling. As a result, Mother and Child is often a poignant portrayal of family ties.
Posted by Pat Mullen at 6/09/2010 01:26:00 PM