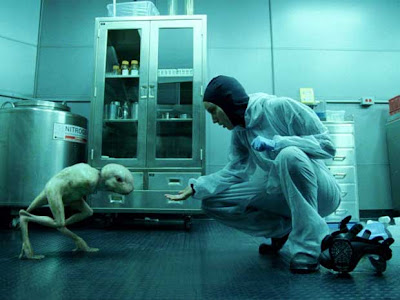 A smart exercise in genre-splicing, Splice deftly combines elements of science fiction and horror to deliver an intriguing and innovative experience. The film begins in the vein of philosophical sci-fi films like Contact or Gattaca and soon evolves into a super-contemplative take on Frankenstein or Rosemary's Baby. In Splice, Dr. Frankenstein and Rosemary are replaced by Clive and Elsa, played by Adrien Brody and Canadian actress Sarah Polley.

Clive and Elsa are a research team on the verge of a scientific breakthrough in gene-splicing. Having been commissioned by a pharmaceutical company to create hybrid species in order to investigate new ways of combating human diseases, the couple's research is put at a standstill when their financiers order them to mine the commercial aspects of their endeavors rather than the scientific ones. Dejected at having come so close, yet so far, Elsa persuades Clive to help her continue their research in secret. The pair thus begins to doctor a new species by splicing it with human DNA. The trial is a success and the couple soon has a new breed in their lab.
In addition to being lab partners, Elsa and Clive are also romantically linked. Back at home, they speculate on the evolution of their personal life: Clive wants to explore the possibility of having children, but Elsa is hesitant. However, the couple puts their personal life on the back burner when their new species develops at a rapid rate. The specimen is soon born and it begins to mature exponentially faster than an ordinary human being. Concerned that the project crosses too many ethical boundaries, Clive wants to kill the creature. Elsa, however, connects with the creature and becomes obsessively protective of her. Elsa begins to spend an inordinate amount of time with the specimen and her maternal instincts begin to blend with (and inhibit) those scientific. 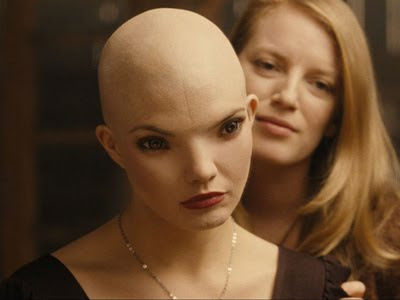 The humanoid, which Elsa names Dren, is an odd looking creature. She appears to be a mix of rabbit, chicken, lizard, and human. She also looks eerily related to the grotesque baby from Eraserhead. Dren also happens to be extremely smart, strong, and dexterous; in addition, she's armed with a large stringer on the back of her tail. Clive and Elsa worry that Dren poses a threat to the other scientists in the lab (and vice versa) and they remove her from the research centre and move her to Elsa's long abandoned family farm. 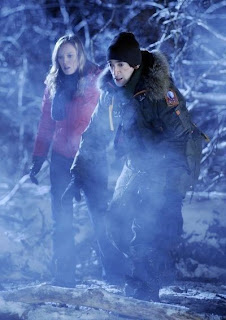 Splice succeeds as an exercise in both science fiction and horror because the premise is very much within the realm of possibility. Cloning, genetics, and scientific manipulation have reached such an advanced stage in contemporary science that the idea of creating a new sub-species of human does not seem implausible. The normalcy of Clive and Elsa's experiment makes the outcome even more engrossing and horrific. The film also thrives by presenting cloning as equally beneficial and destructive: the study has numerous profits in terms of enabling cures for human diseases, but the unpredictability of the study lends an underlying suspense to the experiment. The human element of gene-splicing also makes the trial unethical and illegal, thus disabling any profits from the study. It also offers a strong moral center to the narrative because Clive and Elsa are conflicted with the notion of terminating Dren, as they realize that she is more than just an ordinary lab rat. Dren's human traits also introduce several questions about love, family, and human nature, which allow Splice to move from profound to perilous and back within a few brief scenes.

Due to the ambiguous nature of Dren's disposition, there are several tense scenes in which the viewer is forced to pensively observe the scientists risk their lives in the pursuit of knowledge. This further enables the plot twists to emerge organically. Polley and Brody offer compelling and conflicted performances as the two scientists, and newcomer Delphine Chanéac makes Dren a sympathetic victim/villain hybrid.

Splice also benefits from Nivoli's sense of restraint, as the film never verges into gratuitous violence or tiresome pop-out surprises and overbearing orchestral accompaniments that many horror films substitute for tension. Nivoli and his writing team understand that Splice is at its most suspenseful whenever it hangs upon a moment of discovery. Splice, therefore, is filmmaking at its thought provoking best.
Posted by Pat Mullen at 6/07/2010 10:03:00 AM