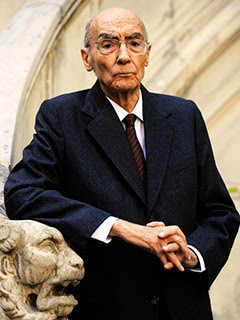 The New York Times reports the death of acclaimed Portuguese author José Saramago. Saramago's publicist offered no details about the author's death, but he is known to have been in very poor health the past few years. José Saramago is probably my favorite author. He had a unique, lucid, and original writing style that offered profound descriptions of ordinary human beings and he made it all thoroughly enjoyable with his playfully colloquial language. Saramago is probably most famous for his novel Blindness, which was made into a 2008 film starring Julianne Moore. In fact, Saramago was too ill to attend the Cannes premiere of Blindness, so director Fernando Meirelles flew to Lisbon and personally screened the film for him. Saramago also wrote celebrated novels including The Cave, Death With Interruptions, The Year of the Death of Ricardo Reis, and Seeing, a follow-up to Blindness. Saramago also wrote the controversial 1992 fictionalization of Jesus Christ, The Gospel According to Jesus Christ, which depicted Christ in a relationship with Mary Magdalene. In 1998, Saramago was honored with the Nobel Prize for Literature.