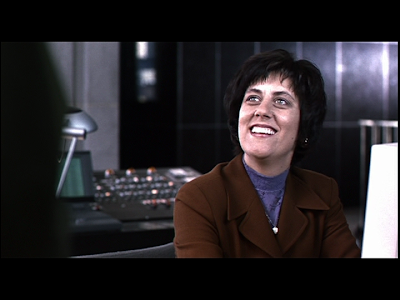 When I opened the Ottawa Citizen this morning, I was saddened to read that Canadian actress Tracy Wright passed away on Tuesday after her battle with cancer. Wright was 50.

Although Wright mostly found success on stage, she did have several memorable film roles. Her role as David Cronenberg's oddball secretary in 1998's Last Night (pictured) is one of the film's highlights. Last Night was directed by Don McKellar, Wright's husband. Wright also appeared in "Twitch City" and Miranda July's Me, and You, and Everyone We Know.

Tracy Wright completed filming of Bruce McDonald's Trigger in February. The film is expected to premiere at this year's Toronto International Film Festival and should be a nice tribute to the actress.
Posted by Pat Mullen at 6/25/2010 10:54:00 AM