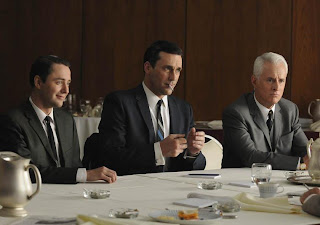 "...change is neither good nor bad, it simply is. It can be greeted with terror or joy, a tantrum that says "I want it the way it was," or a dance that says, Look, something new!"  -Don Draper

Very little (ie: nothing) has been said about Season 4, although I've been trying not to read too much about the show to avoid potential spoilers. All I can really tell is that Peggy sports a nifty Jackie O haircut. Last season ended with Don and most of the key players jumping ship from Sterling Cooper and creating a new agency, Sterling Cooper Draper Pryce. Don and Betty's relationship also dissolved in the final episodes. Both at home and at work, Season 4 will really see Don fighting for his life. 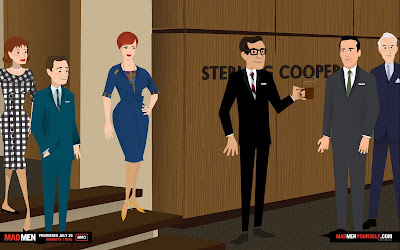 In anticipation of the premiere of Season 4, I made my own likeness on the Mad Men yourself game on AMC's website. I think I fit right in at Sterling Cooper.