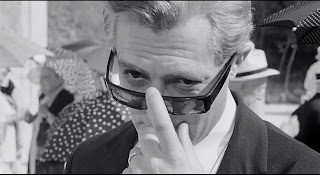 My parents are leaving this weekend for a trip to London and Italy. So Jealous! Fortunately, for those of us who must spend our summers working, etc., we can content ourselves with a little cinema italiano. Starting tonight, the Bytowne in Ottawa will be running Frederico Fellini's acclaimed film 8 ½  as part of their "Must See Cinema" series.
Many critics hail 8 ½ as Fellini's masterpiece. Although I personally prefer La Dolce Vita, 8 ½ is a fun and fascinating film that should delight any moviegoer. Marcello Mastroianni stars as Guido, an imaginative film director whose creative musings run astray as he tries to create his next film.
8 ½ is also a must for any fans of Rob Marshall's spectacular musical-remake Nine. As much as I loved the razzle-dazzle of Nine, 8 ½  is where it's at if you really want the goods.