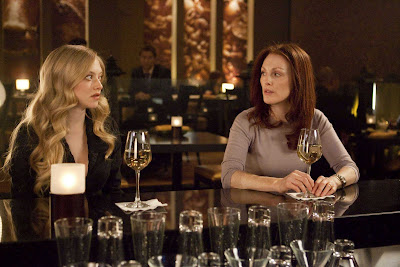 Chloe, the latest film by Canadian director Atom Egoyan, makes its way onto DVD today. I first saw Chloe at the 2009 Toronto Film Festival and was absolutely mesmerized by its intriguing exploration of infidelity and its seductive compositions. I was also blown away by the powerhouse acting duo of Julianne Moore and Amanda Seyfried. As Catherine, a wealthy Toronto doctor who suspects her husband (Liam Neeson) of being unfaithful, Moore give one of her better performances, offering a masterfully self-destructive blend of jealousy and longing. Seyfried is the film's biggest surprise as Chloe, a prostitute whom Catherine hires to test her suspicions. Seyfried's Chloe is an alluring presence and her doe-eyed innocence is a fatal entrapment into her dangerously manipulative persona.

Today was the first time I'd seen the film since the festival, and the theatrical cut of Chloe is just as good. I was surprised to see the few scenes that were cut from the film, particularly the one in which Catherine and Chloe discuss their family secrets. The scenes are available in the bonus features section and are worth a look.

While Chloe isn't entirely on par with Egoyan's Exotica or The Sweet Hereafter, it's his strongest work since. That's saying a lot. Chloe's also worth seeing for any Canadian moviegoer who'd like to see Toronto as Toronto. The city's large presence in the film is more appreciated given that Chloe is easily the best Canadian film so far this year. Not only that, it's surely to be one of the year's best, period.