Review: Exit Through the Gift Shop ★★★★ 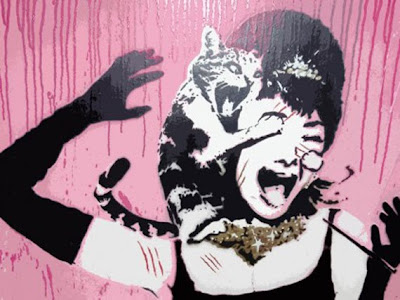 Last Christmas, my sister gave my brother a really bizarre art screen print: the gift was a portrait of Audrey Hepburn as Holly Golightly. It is a chic pink likeness of the iconic Breakfast at Tiffany’s character, except there is a cat on her head, and it’s mauling her and scratching her eyes out. It might sound morbid, but it’s one of the funniest pieces I have seen. It’s also quite the conversation piece.

The artist of this satirical picture is Banksy, a British “street-artist” who gained notoriety and acclaim for covertly placing his artistic renderings on public spaces. That sparked my curiosity to see this picture, as Exit Through the Gift Shop is the first film directed by the artist. I went into the film knowing next to nothing about it, expecting just a quirky little ditty about graffiti. However, like its subject, the film was about so much more. 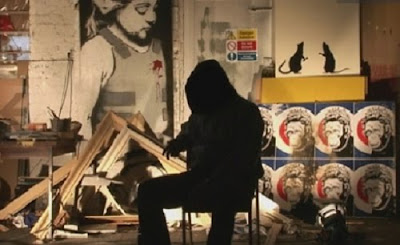 The film opens in an interview with Banksy. The artist is captured in silhouette and his voice has been distorted – he’s obviously aware of the illegality of his work and does not want to incriminate himself while discussing his art publicly. Banksy says that this is a film about Thierry Guetta, an eccentric Frenchman whom Banksy first met when Guetta was filming a documentary about street art. As Banksy notes, that film was shut down and now Guetta has become the subject of his own footage.

The first hour or so of Exit Through the Gift Shop takes us through Thierry’s recordings. Thierry spent several years following self-proclaimed “street artists” as they tagged various buildings and spaces with their provocative art. As the ironic narration by actor Rhys Ifans informs us, Thierry approached his subjects rather haphazardly: even from the footage, it’s obvious that Thierry was shooting mostly for the thrill of it. As the Brits would say, Thierry is a bit of a nutter. When the artists catch on to this, and it takes a surprisingly long time for them to do so, Thierry spontaneously decides that he is making a documentary about street art. 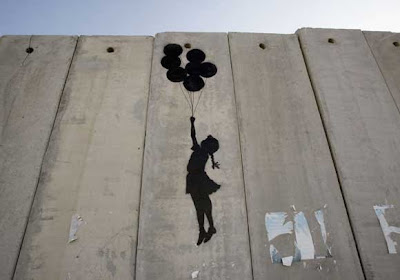 Thierry’s exploration of the world of street art finds him seeking an interview with Banksy, whose status in the community makes him like the Holy Grail of interviews. Through his search for and eventual engagement with Banksy, Thierry’s videos offer a fascinating look at an art that goes far beyond the categorization of graffiti. Although the artists do their work on public and/or private spaces, it would be wrong to call it vandalism. It’s not like they are a group of mischievous kids spray-painting penises on walls and stop signs. Rather, Banksy the other underground artists make astute statements in public places. The skill and originality of their work puts it in the class of some of the pieces by Andy Warhol or Damien Hirst. (I don’t mean that derogatorily.) Furthermore, the level of debate stemming from the street art shows that it certainly has some artistic merit, as it incites a polarizing discussing from the public. 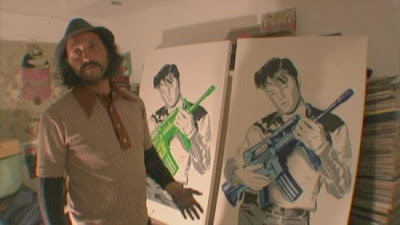 In the final act of the documentary, the film almost turns on its subject. Following an offhanded suggestion by Banksy, Thierry aspires to become a successful street artist. He dubs himself “Mr. Brainwash” and mortgages his home and shop in order to set up an industrial scale production of contemporary pop art. After one gargantuan show in Los Angeles, Mr. Brainwash is an overnight phenomenon. Banksy and his fellow street artists express a slight disdain at Thierry’s success. They almost lament the fact that if Thierry can do it, anyone can. However, is that not something to be appreciated? Alternatively, does the instant sensation of Thierry's art cheapen the work done by the other artists?

Moreover, Banksy chides Thierry’s work as lackluster because it is exactly like the work done by him and the other artists. If that’s the case, is Banksy not devaluing his own art? Through Thierry’s success, the film almost suggests that the value of art comes as much from the motivation behind its creation as it does from the artistic quality of the final product. In either case, Exit Through the Gift Shop is an insightful and entertaining exploration of the foundations of contemporary art.