Review: The Girl Who Played With Fire ★★★ 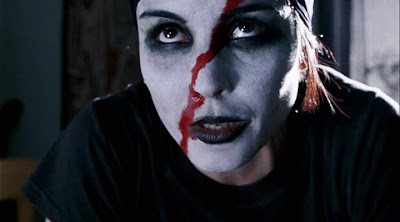 The second installment in Stieg Larsson’s Millennium Trilogy is a case study of the variability to page-to-screen efforts: whereas the second novel excelled the first, the film of The Girl Who Played With Fire fails to match the high standard set by The Girl With the Dragon Tattoo. The latest film assumes that viewers are not approaching the tale of Lisbeth Salander with a blank slate: viewers unfamiliar with the previous film/book will immediately be lost in their efforts to discern the characters’ relationships to one another, as well as a context in which to receive them. Little more than a few passing references are made to The Girl With the Dragon Tattoo, the largest of which is a refresher on what happened between Lisbeth and her legal guardian Nils Bjurman, who now wants revenge on Lisbeth for her retaliation against his sadistic abuse of power during their relationship. 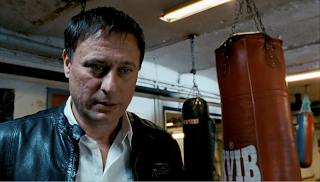 As she was in Tattoo, Lisbeth is at the centre of a murder investigation. This time, however, she is the object of the search and not the searcher. Following a heated encounter with Bjurman, Lisbeth soon finds herself the prime suspect in a triple homicide. Two of Lisbeth’s alleged victims were on the cusp of delivering a scandalous exposé on Sweden’s sex-trafficking business for Millennium magazine, which is run by Mikael Blomkvist, Lisbeth’s partner from The Girl With the Dragon Tattoo.

Noomi Rapace returns with the same hard-edged spunkiness that made Lisbeth Salander such an intriguing character in the first installment. However, in Fire, Lisbeth’s changed a little: she is more open, more vulnerable, and more deadly. Michael Nyqvist also reappears as Blomkvist, the efficient journalist whom Lisbeth saved in the previous film. Lisbeth and Blomkvist are no longer a team, but they’re certainly allies since Mikael begins his own inquiry into the murders in an effort to prove Lisbeth’s innocence. 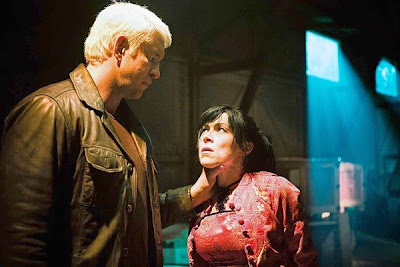 The second film of the Millennium trilogy also includes a few new faces: Yasmine Garbi appears as Miriam Wu, Lisbeth’s casual girlfriend. (She only appeared very, very. briefly in the first film.) Also new is Ron Niedermann (Micke Spritz), a silent super-strong henchman who is like Jaws from the James Bond movies, just without the funky steel teeth. There’s also Paolo Roberto, a friend from Lisbeth’s boxing days who abruptly introduces himself at a crucial moment in the film.

Whereas Tattoo slowly introduced the characters and the situation, the second film moves at lighting speed: almost all of the unnecessary exposition of the novel is reduced to a few helpful lines of dialogue. In fact, the film zips through roughly five hundred pages of the novel in its first forty-five minutes or so. The filmmakers manage to play connect the dots with most of the major plot points from the novel, but in doing so, they also pare away much of the meat from Larsson’s tale.

Although the weakest point of The Girl With the Dragon Tattoo was its slow pace, the film of The Girl Who Played With Fire would benefit from a more substantive first act: The novel opens with a disturbing sequence that teasingly hints at the events that tormented Lisbeth in her youth. The film opens with a brief montage of the events – only a fleeting ten seconds or so – and omits much of the sub-plots related to uncovering the mystery of what Lisbeth refers to as “All the Evil”. The film, therefore, reduces the intrigue of uncovering Lisbeth Salander for the sake of focusing on the mystery of who killed Mikael’s friends Dag and Mia. The film suffers greatly for this investigatory shift because the murder plot was mostly a clever vehicle for exploring the psyche of Larsson’s heroine.

Despite the scattershot storytelling of the first half of the film, the latter part of The Girl Who Played With Fire is a mostly satisfying rendering of the novel’s final act. From the cabin scene onwards, Alfredson tells the story more thoroughly, thus allowing for adequate engagement with the characters. The final scenes offer a glimpse at Lisbeth’s tormented history for viewers that have not read the novel. However, even as Lisbeth encounters her past and her dysfunctional family – a group of relations so grotesque they resemble something out of a Faulkner novel – the emotional payoff is muted because Lisbeth’s history is introduced so late in the film and has not been building with the same urgency as it did in the novel.


The film does however offer a finale that remedies the cartoonishly violent ending that marred Larsson’s novel. Although the ending unfolds roughly the same as it did in the book, it isn’t nearly as absurd on film as it is in print. In both cases, The Girl Who Played With Fire ends with a thrilling cliffhanger that guarantees viewers will return to see whether Lisbeth kicks the bucket…or the hornet’s nest.