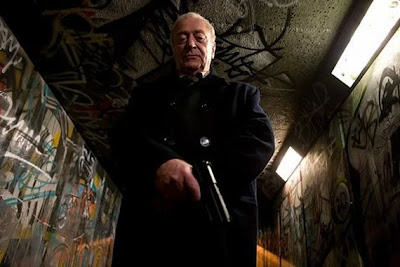 “In the old days, we confiscated cigarettes and wank mags. Now it's knives and crack cocaine. And they call it progress,” says Barbara Covett, the old battle-axe schoolteacher played by Judi Dench in Notes on a Scandal. The times have changed in Britain, apparently. The proper English gentleman is fading away and is slowly being replaced by violent expletive-spewing hoodlums.

This is seen first hand in Harry Brown. The film opens with a handheld video sequence in which a group of thugs torment a woman in a park: she’s innocently walking her baby and they viciously taunt her with a gun. It’s all fun and games for them as they fire aimlessly and watch her dodge bullets, except that one makes contact, thus making the poor mother a victim of a random and senseless act of violence.

Cut to Harry Brown. Played by Michael Caine, Harry is a proper man of the old school. Even though he’s a retired, he gets up at 6:30 every morning, makes himself tea and toast, and quickly washes the dishes and sweeps away the crumbs before heading out. Too bad for Harry though, because he lives in a graffiti-laden, rough and tough part of town. His neighborhood has become so dangerous that he cannot even use the pedestrian underpass and must take the long way around when walking to the hospital to visit his dying wife. 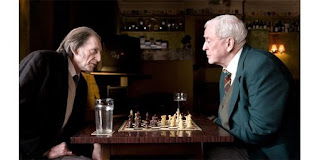 One day in the pub, Harry and his friend Len (David Bradley) witness a drug deal in open view. Len goes on to comment about how troubled the youth are becoming. Worse, he is being harassed by a group of hoods, and confides to Harry that he is going to shank the lot of them because the police have failed to act on his reports of the aggravations.

The next day, Harry receives a visit from Detective Alice Frampton (Emily Mortimer), who tells him that Len was murdered during the night by a group of thugs. Harry is distraught by the loss of his last friend, and his grief is further compounded later on in the investigation when Det. Frampton informs him that the kids may get off on a murder charge because Len himself was armed. This news, coupled with a violent encounter Harry has on his way home from the pub one evening, incites Harry to finish the job Len began. 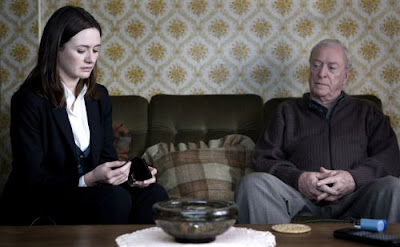 “I want to shoot some pigeons,” Harry says when a gang member asks why the old man wants to buy a gun. There’s some truth to that: Harry does seek to clean up the streets. And he does: he sets off on a revenge mission against the goons who killed Len because the police aren’t doing anything about it. When it comes down to Grandpa to put a cap in their ass, times must be pretty bad. 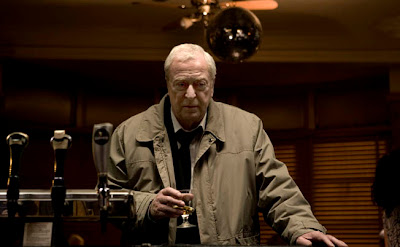 As Harry goes about dispensing justice, Caine offers a mesmerizing performance of a man who refuses to be a victim. Harry is a tough old man, but Caine isn’t afraid to show the audience of the emotional toll the violence takes on his character, either. Caine really is a powerhouse: his gun toting geriatric is among the most intimidating and likable screen characters this year. Furthermore, it’s neat to see the original Get Carter back in revenge mode, except in a more mature and vulnerable way.
Harry Brown is a lot more than a blood-soaked revenge thriller. Like Harry, the film itself is quite mature: it offers a wry commentary on the changing times. The violent portrayal of Britain’s disillusioned youth makes an astute companion piece to this year’s Fish Tank. Both films examine the disconnect created when the most vulnerable members of society are failed by the system. Harry Brown is a potent look at one man’s last attempt to repair the social order before his time is up. This British crime-thriller is what 2008’s Gran Torino should have been.


Like Gran Torino, Harry Brown is smart enough to remind the viewer that violence is not the answer. As Det. Frampton realizes that the suspects in Len’s murder are being picked off, she suspects Harry of being the vigilante and thinks he should be taken in. Her partner, Hicock, has a different view. “He’s doing us a favor,” he says. However, Det. Frampton also understands that even if Harry eliminates Len’s killers, the violence won’t end there. She reminds Harry that someone will undoubtedly come after him, so his vigilante justice actually just perpetuates the cycle of violence on which the hoodlums thrive. 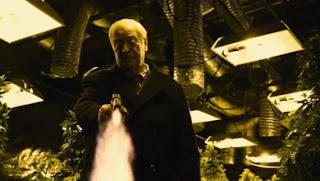 Through Harry’s plight, Harry Brown offers a troublesome look at street crime, and a bothersome essay on the disparity between law and justice that is reminiscent of the underrated Jodie Foster film The Brave One. Despite its similarity to the Foster/Eastwood thrillers, Harry Brown is a superior, grittier, and more provocative crime drama. In addition, with Caine looking down the barrel of the gun, he also makes it a bit dignified.