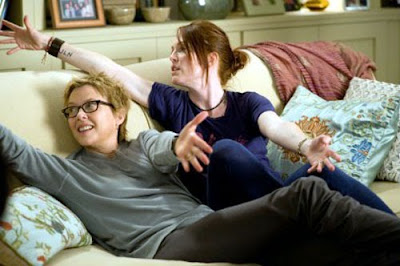 I wonder how easy it is to find a greeting card that says “Happy Mothers’ Day”? Probably not very. Too bad, because The Kids Are All Right shows that sometimes, two moms are better than one. The two moms are Nic and Jules, played by Annette Bening and Julianne Moore, respectively. With her short-cropped her and type-A personality, Nic could be like the “husband” in the marriage, and Jules, a more sensitive waify type, could be the "wife"; however, The Kids Are All Right avoids such stereotypes and rather uses the moms’ likeness to other parents to effectively deconstruct contemporary notions of the nuclear family.

Bening and Moore offer two of the year’s best performances as Nic and Jules. Interestingly, both actresses play characters similar to those of their films earlier this year, yet the difference with which they express each part displays the versatility of each great actress. In Mother and Child, Annette Bening played Karen, who, like Nic, is neurotic in her desire to realize her ideals for the family. Whereas Karen was devastatingly damaged, Bening’s Nic is a strong, but fragile, mother fighting to preserve her family. At times, Nic can be just as overbearing as Karen, but with the passionate concern that Bening invests in her character, Nic is far more hopeful and sympathetic. Similarly, Julianne Moore’s Jules feels that her wife no longer finds her attractive, much like her character Catherine in Chloe feared that her husband was being unfaithful because he found her to be losing her sex appeal. In both films, Moore’s characters find themselves in situations that lead them to question themselves, but in Kids, Moore offers a more endearing and sensitive performance that is dramatically polar to her subtle displays of desire in Chloe. Together, Bening and Moore make a most dynamic and engaging onscreen team. 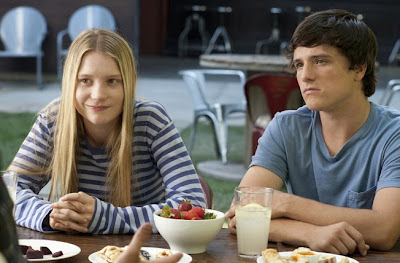 Nic and Jules’ kids are Joni (Mia Wasikowska from Alice in Wonderland) and Laser (Josh Hutcherson from The Polar Express). Both kids are from the same sperm donor, except each had a different mom: Nic had Joni and Jules had Laser. This provides some brief tension during the film; but more importantly, it shows that the importance of a parental figure is his or her presence and not mere biology. Their sperm donor has been unknown to the kids during childhood, but now that Mia is eighteen, she can legally seek contact with the donor and does so at Laser’s request. The donor is Paul (Mark Ruffalo), a rugged Joni-Mitchell-lovin' restaurateur. Joni and Laser meet Paul, and things go rather well. The kids are intrigued by Paul’s contribution to their lives and Paul is surprisingly pleased at the prospect of being a father figure. Wasikowska and Hutcherson are very impressive as the innocent and plausibly conflicted kids, while Ruffalo gives his best work since You Can Count On Me. He makes Paul an immensely likeable character: he is just like any other proud and awkward dad. 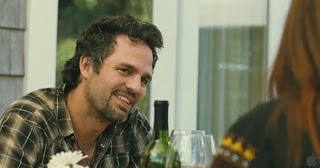 Joni and Laser are unable to keep their relationship with Paul a secret for long. When Nic and Jules discover Paul’s presence in the lives of their children, they are understandably hurt, but like good parents, they agree to allow Paul to be a part of their lives because it is important to their children. Once Paul enters the family equation, Nic and Jules begin to see their family in a new light.

What is most surprising about The Kids Are All Right is the normalcy of the family dynamic. Nic and Jules really aren’t any different from other moms, except for that in their relationship, mom is always plural. Nic and Jules are just like any other group of parents: they’re overprotective, they’re embarrassing, and they’re overbearing at times. Furthermore, they are as concerned for the well being of their children as any heterosexual parents would be. Throughout the complications that arise, Nic and Jules always put the needs of their children ahead of their own. Cholodenko and Blumberg’s script succeeds by simply portraying the family, letting the relationships speak for themselves, and allowing the audience to observe two mothers raise their children as competently as would a mother and father. 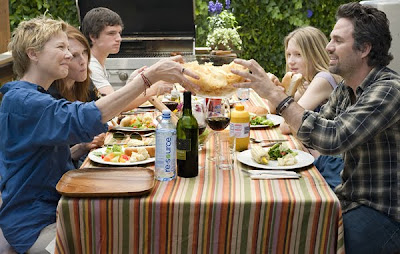 The film also doesn’t shy away from confronting the arguments that children raised by same sex couples may be susceptible to becoming homosexual themselves. In one of the early scenes, Nic and Jules speculate as to whether Laser may be gay. The way in which the couple skirts about the issue suggests a reluctance to admit that they may be somewhat responsible. The actresses carry the dialogue with humorous deadpan delivery and offer a poignant rendering of a conversation that their own mother and father must have had decades ago. 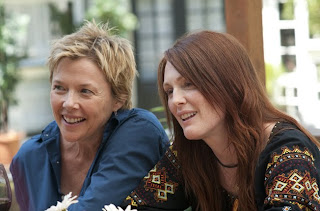 Through her understated portrayal of these same-sex parents, Lisa Cholodenko offers a smart essay on the current state of the family. The hilarity she imbues into Nic and Jules’ situation opens many provocative questions about contemporary attitudes towards sexuality. The film provides many of the answers too, as one can’t help but walk away from the film with a warm feeling that as parents, Nic and Jules did all right.