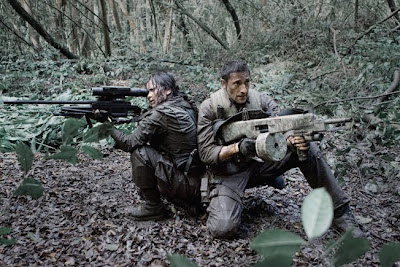 Replacing Arnold in the Predator franchise is Adrien Brody as a nameless Black-Ops soldier who wakes up in midair as he hurtles towards the ground. Once safely landed, he encounters a bunch of other mercenaries that are equally puzzled by their sudden appearance is this mysterious rain forest. They’re mostly all nameless, so you know we’re as deep in allegory land as we are in the jungle. Yep, that’s right: Predators is a message movie! 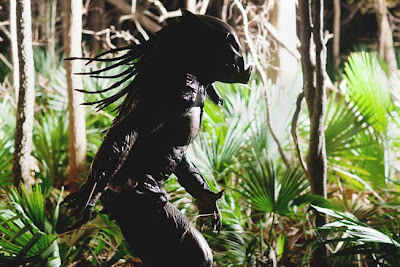 As soon as all these hotheaded killers group together, it’s shoot first, ask questions later. However, when they realize what they’re up against, they re-evaluate their situation. Brody’s character assumes the leadership position, which is appropriate because he has a way of deducing things a little too quickly or conveniently to grant the film any suspense/mystery. After beating around in the bush for a little, Brody and his troupe of killing machines discover that they are being hunted by a band of super techno alien warriors.


As the humans are tracked down and picked off one by one, Predators chugs along without doing much. Aside from upping the quality of the graphics and making the beasts a little more sophisticated than they were in the original, Predators doesn’t aspire to improve upon its predecessors. It is another of those odd “reimaginings” that is not quite a remake, but not quite a sequel. In essence, it’s just more of the same. Well, not really. Predators lies somewhere between the 80’s Arnold action flick and the Alien Vs. Predator cash grabs. Unfortunately, since the Governator and the Alien are absent from this installment, so is the camp value that is necessary for making the adventure as fun as it should be. Personally, I liked this movie a lot more when it was called Battle Royale. 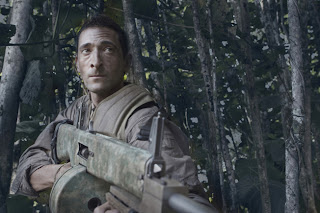 Furthermore, although he shows more brain than brawn, Brody isn’t as great an action star as Schwarzenegger. Whereas Arnold’s senseless testosterone displays and stupid one-liners provide a cheesy thrill, it all seems undignified when done by Brody. Even though Brody is a far better actor and manages to convince in some of the scenes in which his character displays his war-game methodology, the movie seems beneath him.
There are, however, a few decent action sequences in Predators. The production values are generally good as well. As far as summer matinees go, one can surely do worse than Predators. One can probably do better, too.
Posted by Pat Mullen at 7/20/2010 09:17:00 PM