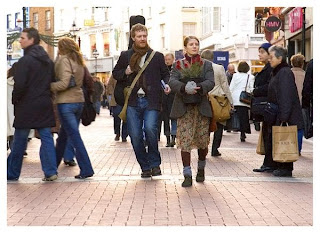 Last night, I caught my one “must see” act of this year’s Bluesfest Lineup: The Swell Season. Like many, I was first introduced to Swell Season’s Glen Hansard and Marketa Irglova through the 2007 film Once (pictured). The Swell Season offers and eclectic blend of folk rock music, and their appearance at Bluesfest was a great chance to hear their beautiful harmony in a live venue. It was also a perfect night for an outdoor concert.
Well, almost perfect. Unfortunately, there was a lot of interference from the Rush concert on the main stage. Even so, The Swell Season took it in stride and playfully showed Rush the difference between music and noise. Hansard was particularly good at engaging the audience in joining in to overcome the bombastic intrusions. If anything, having the crowd sing along made the concert all the more enjoyable.

The band mostly played tracks from their latest album Strict Joy (it’s amazing – buy it here). There were a few songs from the Once soundtrack peppered into the set as well. The band actually teased the audience that it was too loud for them to play Falling Slowly, but after much pleading, the sing-a-long ended up being on of the show’s highlights. The best songs of the night were the energetic renditions of Feeling the Pull and High Horses, which was the band’s encore. 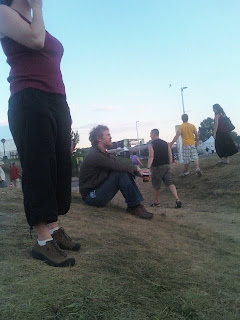 But wait! The best part of the night has yet to be mentioned! Before the show, I was sitting with my cousin Kelsey and we were listening to the band that was on the Hard Rock Café stage before The Swell Season. At one point, I looked to my left just to see how much the crowd was building up. I gasped and did a double take. “Kelsey!” I said. “Look! The guy from The Swell Season is sitting right there!” Sure enough, Glen Hansard was sitting on the grass just a few feet away, getting a feel for the sound before the show. Then there was an awkward confusion as we each thought the other had a pen and we went over and asked Hansard if he could sign our tickets. He didn’t have a pen either, but he asked if we knew what the name was of the band that was playing. Being awkward again, neither of us knew, but it was still really cool. (Kelsey also managed to snap a creeper pic before we went over!)
The Swell Season put on a great show, and I can’t wait to hear them again in a venue better suited for their lovely ballads. And thanks to Kelsey and my Uncle Kevin for being great company!
Posted by Pat Mullen at 7/12/2010 05:38:00 PM