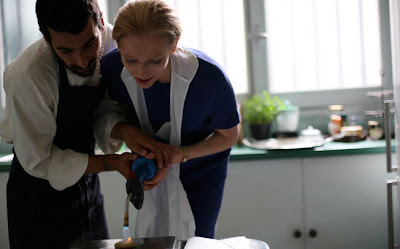 We first meet Emma at the Recchi family compound as they prepare to fete the family patriarch. The demeanor of the Recchi clan is as cold as the blustery snowfall going on outside, save for the smiles from Emma as she reassures her children that all is well. Furthermore, the camera’s reluctance to linger on Emma  marks her as an outsider. She rather is – Emma is a Russian woman who has married into this wealthy Italian family via Tancredi (Pippo Delbono), and there isn’t the least visible bit of warmth between Emma and her husband. Emma seems ill at ease with the whole group and looks more comfortable in the company of her servants and cooks.

When Emma’s son, Edoardo (Flavio Parenti), receives a visit from his friend, Antonio (Edoardo Gabriellini), things start to change. Antonio is a talented chef, and after catering a party for Edoardo, the two make plans to open a restaurant. One day, Emma and some of the family drop into Antonio’s restaurant to get a taste of her son’s business prospects. 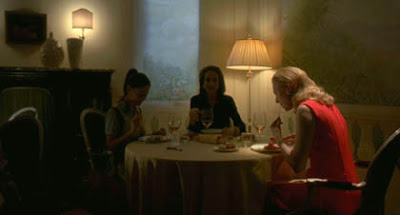 When Antonio places a delectable prawn dish in front of Emma, she experiences a sexual awakening. When Swinton delicately cuts into the crustacean, the backlights

dim around the other guests and Emma is bathed in a golden spotlight as she savors the dish. As Swinton cocks her head and shifts about in her red dress, the eroticism of the scene is palpable. In fact, I had to shove a handful of buttery popcorn into my mouth in order to refrain myself from shouting, “I’ll have what she’s having!”
Emma soon begins an affair with Antonio, and I am Love quickly becomes a feast of sensuality. (Fans of the artistic dazzle of A Single Man will swoon over I am Love.) Director Luca Guadagnino shoots the love scenes between Emma and Antonio quite beautifully. At one point, the couple has an amorous encounter in the Italian hillside, and the imagery flickers between shots of the couple’s embrace and fetishistic scenic views. It’s a striking way of juxtaposing the corporeal and ethereal elements of love. The beautiful Italian countryside has a way of conveying Emma’s enchantment, right down to the way Swinton intoxicates Emma with the smell of the trees. 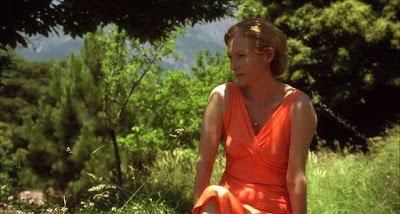 Swinton is most commendable as Emma. Not only does she speak Italian and Russian flawlessly (I think), she expresses herself far beyond the emotional range of most capable actresses. The final scenes of I am Love are truly devastating, but they’re equally joyous thanks to Swinton’s ability to communicate Emma’s grief and desire. What makes I am Love such a rich experience is the way Guadagnino orchestrates the various aspects of his film to create a multifaceted portrayal of love. Emma’s love story is captured in sumptuous soft lighting that warms the heart, and the ever-moving camera adds a voyeuristic quality that is positively brilliant. Additionally, the score by John Adams is sensational – the symphony of staccato notes recalls the pitter-patter of heartbeats generated by Emma’s amorous longing. Like a good Italian opera, I am Love delights in a series of arias that accentuate the ecstasy of her romance – the bombastic brass pulls you into a whirlwind of enchantment, but at no point does the sonorous score overwhelm the film.
Anchored by Swinton’s radiant performance, the elements of I am Love culminate to a most rapturous event. If haven’t said it clearly enough, I loved this film!