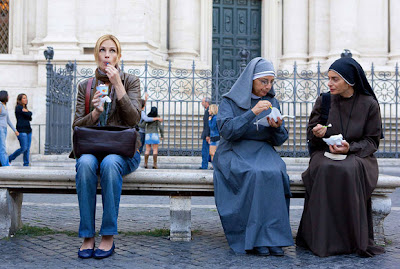 Bellissimo! Liz Gilbert is redeemed! When I first introduced myself to Eat, Pray, Love back in June, I had mixed feelings about it, to say the least. While I found there to be many admirable qualities about Gilbert’s memoir, I felt that Gilbert was her own hindrance, as her inspirational narrative was frequently marred by her narcissistic ranting.

Liz gets a makeover thanks to Julia Roberts and the retooled screenplay by Ryan Murphy and Jennifer Salt. Gone are Liz’s grating self-absorption and condescending sermons - the new Liz is more self-deprecating and accessible. Most of the success comes from the screenwriters’ decision to reconfigure Liz’s story and move most of her motivation to go on her trip up to the beginning of the film where it belongs. In the book, Gilbert opened by describing some of the events that led her to extricate herself from her troubled relationship, most notably the scene in which she prays to God in the bathroom. Concerning her relationship with her husband, however, she glossed over much of what went wrong, but never missed an opportunity to take a shot at him.

In the film, Murphy takes the time to detail the dissolution of Gilbert’s self in her empty marriage, and he takes the necessary steps to depict Gilbert’s divorce and subsequent rebound relationship. As a result, it’s easier to understand Liz’s despair and feel compassionate for her whenever she looks back in anger; moreover, Roberts nails the early scenes in which Liz describes her lost appetite for life, so her year-long expedition is more apparent as a necessary catharsis, whereas in her memoir, Gilbert seemed to be escaping her problems with little regard for the other parties involved. The thorough development of Liz’s self-breakdown also gives the film a fine balance, as the darker moments of her life are in the early parts of the film, and her journey is, therefore, much lighter, more enjoyable, and more enlightening. 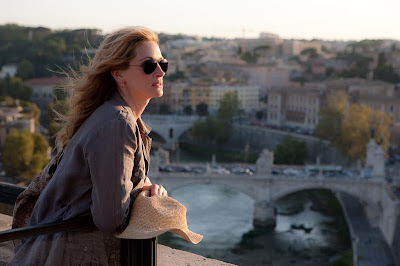 Gilbert’s plan to resurrect her life comes from an indulgence in her biggest pleasure: travel. In one year, Liz visits Italy (to eat), India (to pray), and Bali (to love).
The Italy segment is particularly enjoyable. In her four months in Italy, Liz celebrates the local flavors – both culinary and culturally. The Italian sequence is also the portion of the film that is most attune to Gilbert’s keen observations for the little things that afford pleasure in travel. From the appreciation of a beautiful word to a celebration of unique customs, Liz’s Italian adventure offers a refreshing example for how to live one’s life pragmatically and peacefully. 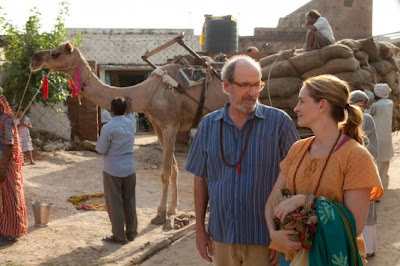 In India, Gilbert visits an ashram to develop her inner harmony through meditation and spiritual ritual. At the ashram, Liz meets a blunt and boorish American named Richard, played by Richard Jenkins from The Visitor. Roberts and Jenkins have wonderful chemistry. Together, they offer a richly realized case of facing one’s faults and finding the strength to reconcile them. In one of their final scenes, Jenkins gives a heart-wrenching monologue in which Richard describes the low points in his life that lead him to pursue his spiritually. The vulnerability that Jenkins and Roberts grant their characters affords the film a rich emotional payoff and elevates the lesson of Eat, Pray, Love beyond that of the book. 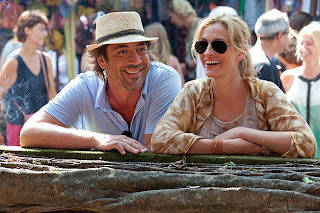 Finally, in Bali, Liz falls in love with a sensitive mix-tape lovin’ Brazilian named Felipe (Javier Bardem). Unfortunately, the Bali sequence isn’t as strong as the other three-quarters of the film are, and the film suffers for it. There’s too much going on in the final act of the film to really connect with the additional characters: in addition to her relationship with Felipe, Liz works for Ketut, an old medicine man played by Hadi Subiyanto, and she strikes up a friendship with a single mother, Wayan, and her young daughter, Tutti. The scenes in which Liz helps Wayan and Tutti are particularly underdeveloped. Nonetheless, because the film omits much of Gilbert’s self-important diatribes, the final act of the film makes it very clear that she actually learned something in her odyssey, which was something I didn’t feel when reading the book. As Gilbert, Roberts is a delight. Eat, Pray, Love showcases one of her better performances – a soulful embodiment of joie de vivre that harkens back to her Pretty Woman days. She also isn’t afraid to expose the faults in her character, so Gilbert’s humanity resonates more thoroughly than it did in the book. Much of the supporting cast complements Roberts’s spirited performance – in addition to Jenkins, the film benefits from the presence of Viola Davis as Liz’s friend Deliah, who injects some necessary sass and humor into the first act of the film. Also worth mentioning is some beautiful cinematography by Robert Richardson, although I would have preferred if some of the scenes had been a little more static, and a nice eclectic soundtrack that includes “Better Days,” a new song by Eddie Vedder.

Ryan Murphy also fares much better here than he did in Running With Scissors, his last page-to-screen outing. Although the film is sometimes uneven and a little slow, Murphy’s treatment of Gilbert’s memoir allows her lessons to be easily digested. More often than not, everything in Eat, Pray, Love comes together and transports you through a picturesque voyage of self-discovery.