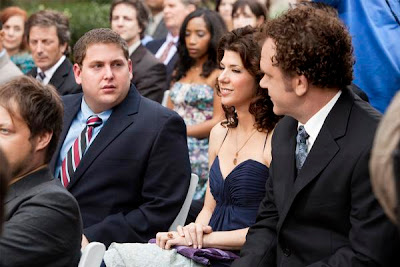 Meeting Molly is just about the best thing to happen to John in the past few years. John is a divorced slob attempting to pull himself together at the behest of his ex-wife Jamie (played by the consistently splendid Catherine Keener). When Jamie brings John along to a posh party, his slovenly appearance makes him the elephant in the room; but, surprisingly, Molly takes a shine to John when she stumbles upon him peeing in the bushes. It’s one of the most awkward first encounters for a couple, but with how easily Molly warms to John’s self-deprecating humor, it’s one of the sweetest as well. 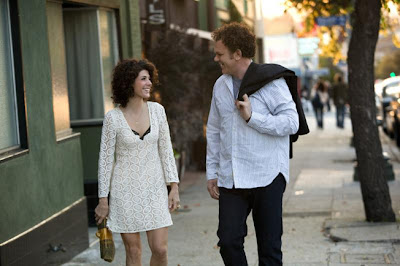 Everything goes well for the first few dates. However, John fears that Molly is hiding something, so he follows her home one night when excuses herself from sleeping over. After stalking Molly, John discovers that she’s not married, but she is a mom.
Enter Cyrus, Molly’s twenty-one year old son. During John’s first dinner with the family, he finds Cyrus’s frank interest in his relationship with Molly rather mature and refreshing. Cyrus’s questioning soon crosses the line, though, and he starts giving off a weird vibe. As the night goes on, John discovers that Molly’s relationship with her son is unconventional to say the least. It is also clear that Molly loves Cyrus and is extremely sensitive to his needs, so John tries to accept the eccentricities of the mother-son bond. 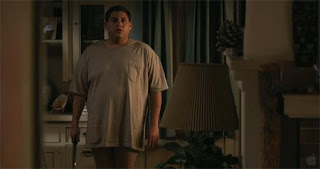 Soon, however, John and Cyrus become rivals for Molly’s attention. As John’s relationship with Molly becomes more serious, Cyrus develops a vicious Oedipal complex. As Cyrus, Jonah Hill transmits the same bug-eyed awkwardness that helped popularize his work in Superbad and Get Him to the Greek. Hill’s ability to keep a straight face while Cyrus antagonizes John is uncanny. The competition that ensues between the two manchildren is bizarrely uproarious.

Although Cyrus’s antics as a devil child are hilarious, it is John’s relationship with Molly that is most endearing. Reilly and Tomei have great chemistry together, which makes the oddball pairing between Molly and the self-described Shrek even more charming. Tomei particularly sells her part: with her flirty eyebrows and sultry allure, Molly is radiant when she’s with John, but when she’s with both John and Cyrus, she’s understandably uneasy and concerned. Tomei makes Molly an extremely rich, engaging, and sympathetic character: It’s a wonderful performance that blends the comedic chops that won her an Oscar for My Cousin Vinny with the mature delicacy of her performance as Pam, the broken-down piece of meat from The Wrestler.
Although the scenes of the John-Molly-Cyrus triangle are frequently entertaining, Cyrus lags at times. However, brothers Jay and Mark Duplass approach the family situation with a stripped down aesthetic that makes Cyrus feel fresh. The hand-held camera work registers the emotional core of the family dilemma and complements the script and performances quite nicely. Cyrus mostly succeeds because the acting quartet has wonderful synergy in their lampoons, which ultimately makes Cyrus a sweet and funny romantic comedy.