All the Right Chords 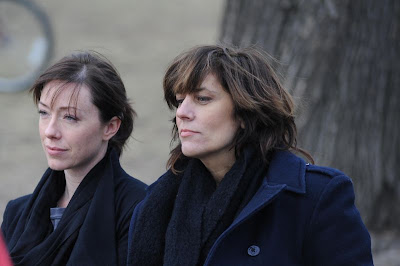 I saw Trigger at the Premiere screening at TIFF, which was also the Grand Opening of the TIFF Bell Lightbox. Trigger was the perfect movie to open the Bell Lightbox, since it was such an important project to many artists within the Toronto film industry. Moreover, as in many of McDonald’s films, Toronto figures prominently, and the cityscape is but one of Trigger’s memorable characters. Additionally, the film features several new groups within the city’s indie rock scene, which is a nice gesture to the emerging performers in Toronto’s cultural community. Trigger also acknowledges the legacy of women in rock – “Save it for Carole Pope,” Vic (Tracy Wright) says to the gushing stage hand played by Sarah Polley.
The inclusion of the bands is most appropriate because Trigger is very much a rock n’ roll movie. The film stars Molly Parker and the late Tracy Wright as Kat and Vic, the two halves of the rock group Trigger, which disbanded a decade ago. Things fell apart due to Vic’s drug abuse and Kat’s alcoholism, as well as the inevitable jealousy and rivalry that come from sharing the spotlight. The dissolution of Trigger is rendered in flashback during the opening credits: it’s amazing how well McDonald et al involve us in the film without a single word of dialogue. 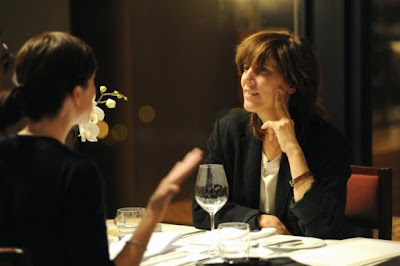 Cut to the present. Vic is being seated in a posh Toronto restaurant. She’s clearly anxious as she waits for the other half of the party to arrive. Kat (Molly Parker) waltzes in forty-five minutes late and the reunion immediately resumes the bitterness that tore them apart. Vic and Kat awkwardly make some small talk and try to forget the past, but they can’t. Their friendly dinner date soon becomes an explosive entrée of insults and old bones. Wright and Parker have extremely good chemistry, and the opening act of Trigger is a delight to watch primarily due to their ability to riff of off one another so well. The free-flowing script by Daniel MacIvor also has a remarkable ear for language and an absorbing emotional core. At no point during the fifteen minutes or so of pure conversation does Trigger feel contrived. 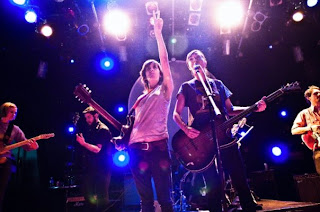 After dinner, things cool down a little as Kat and Vic prepare for a benefit concert for women in rock. Kat’s on the board for the event and wants Trigger to perform at the show, but Vic’s more keen to let the past remain the past. However, as the pair makes their way to the event, Vic realizes how dramatically their addictions and personal demons have altered the course of their lives.
At the concert, Vic continues to resist agreeing to perform, if only to unnerve Kat’s ego. However, almost as a requiem for her wasted youth, Vic jumps on stage and Trigger performs their hit song “Standing Alongside Gone” (written by Brendan Canning of Broken Social Scene). Trigger’s onstage reunion is an energetic and jubilant reconciliation.
Afterwards, the film takes a dramatic turn. When Vic and Kat leave the benefit, they continue to reflect on the dissolution of their friendship. While the conversation doesn’t resume the heated tone, it’s still painful; however, this time it’s more cathartic. At this point, Vic explains to Kat what finally lead her to extricate herself from her self-destructive lifestyle. With Vic’s confession, Wright delivers an impassioned monologue that reaches the depths of her character’s despair. It’s an extremely moving scene, and Wright takes us through an enormous emotional register that lingers long afterwards 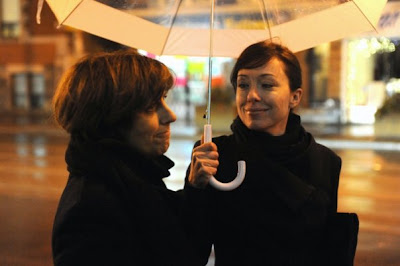 It’s hard to discuss Trigger without commenting upon the circumstances of its production. The film was fast-tracked in shooting in order to ensure that Tracy Wright would be able to star. There are significant parallels between Wright and her character, which make the film even more emotional (but at no point sentimental). It’s important to note, though, that the final product of Trigger is true to the original script: nothing was changed and the story was told the same as it would be had the film been shot this summer rather than during the winter. The cast/crew report that Trigger was shot over four weekends. (I.e.: only eight days of shooting, which is astonishingly brief.) However, in no way does the final product seem rushed or compromised. Rather, Trigger is one of those rare films that comes together so beautifully and in which every aspect exudes the passion with which it was produced.