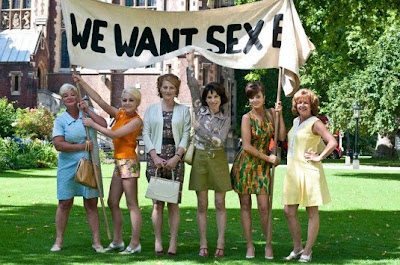 “Chick-flick” is such an unfair term. Many have dubbed Made in Dagenham as such, but to do so reduces it to the level of mindless fluff like Sex and the City 2 or a Katherine Heigl movie. Rather, Made in Dagenham unabashedly celebrates girl-power, but this crowd-pleasing film should appeal to everyone from Joe the Plumber to the ghost of Pauline Kael, and it can be enjoyed by anyone from teens to grandparents.
Sally Hawkins stars as Rita O’Grady, a factory worker in Ford’s Dagenham plant. Rita and about eighty-odd other women work in what are basically sweatshop conditions: literally, it’s so hot in there that the workers whip their tops off and do business in their brassieres. Rita’s best friend Connie (Geraldine James) also happens to be the shop steward for the women’s division, and they’re both well aware of the gap between efforts made on behalf of their employers. When it comes time to finally play hardball with the Ford bigwigs, Albert (Bob Hoskins), their aid in the all matters union, enlists the quick-witted Rita to come along as his “extra man.” 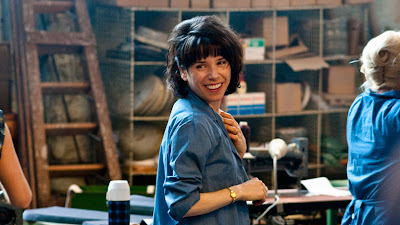 Albert gets more than he bargained for. Before the meeting, the union leader, Monty Taylor (Kenneth Cranham) tells Rita and Connie to just sit politely and nod when necessary, “as women should.” After being subjected to the dismissive efforts between Taylor and the Ford reps, Rita does the unspeakable: she speaks up. Moreover, she shows the bosses just how much they’re denigrating their employees by classifying them as “unskilled” workers, which keeps them at a lower pay grade. Following the meeting, Rita emerges as a fervent fighter for equal pay and equal respect, and she gets the rest of the women to strike for their rights.
Through Rita’s mission, Made in Dagenham comically explores a vital piece of history. Director Nigel Cole and writer Bill Ivory infuse the narrative with droll depictions of the women’s strife. As a result, every minute of the film is thoroughly enjoyable and equally enlightening – if only high school history class could be so effective. 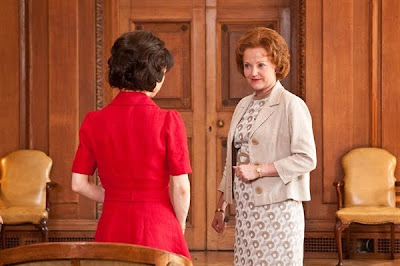 While Made in Dagenham is a powerful celebration of women, it also gives us some women to celebrate. Sally Hawkins is a spirited delight as Rita O’Grady – she possesses the same joie de vivre as Poppy from Happy-Go-Lucky, but Rita also bears a fiery temperament from her hard-knocked life. Hawkins is nothing less than a marvel in this wide-ranging role - in particular, she's a powerhouse in the later scenes in which the values of her struggle enter her homelife. Aiding O’Grady’s effort is Barbara Castle (Miranda Richardson), Britain’s Secretary of State for Employment and Productivity. As Castle, Richardson gives equally strong work in a limited number of scenes. Richardson gets two scenes in particular in which she does a most commendable feat of scene chewing, but she also drives home the importance of the 1968 strike quite well.

Likewise, Rosamund Pike is just as memorable in a small role as Lisa Hopkins, the wife of the CEO of the Ford Dagenham Plant. The scene in which Lisa approaches Rita to lend her support and urge the workers to keep fighting is possibly the emotional crux of the film. Rounding out the spectacular ensemble, and equally worthy of praise, are Hoskins, Geraldine James as Connie, Daniel Mays as Tony O’Grady, and Jaime Winstone and Andrea Riseborough as Rita’s young co-workers.

Made in Dagenham obviously bears much resemblance to other women-in-the-workplace films like Norma Rae and North Country. Any comparison is fair, given that all three films deal with important and relevant stories. However, Made in Dagenham succeeds films within the genre simply for its unrivalled blend of side-splitting satire, dramatically potent storytelling, and powerful emotional resonance – this crowd pleaser is easily among the year’s best!