Dance with the Devil

Black Swan ★★★★★(plus a very high level of distinction) 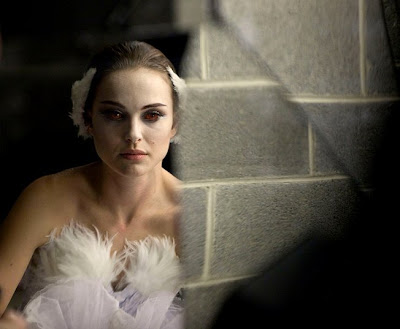 Black Swan is a film so good it almost defies explanation. One might try and toss about a few ballet metaphors to express Aronofsky’s triumph, but to call Black Swan a grand jeté or a symphonic pirouette would be to mute the film’s greatness. Rather, this Swan is of an infinite wingspan, and its ability to soar is unparalleled by virtually every film this year.
Much like Michael Powell and Emeric Pressburger’s 1948 masterpiece The Red Shoes, Black Swan is an astounding psychological drama driven by the artistic obsessiveness of a young ballerina on the rise to stardom. Aronofsky’s film is much indebted to its predecessor – the opening dream sequence of Black Swan is but a mere nod of thanks to the iconic nightmare of the centrepiece ballet of The Red Shoes. 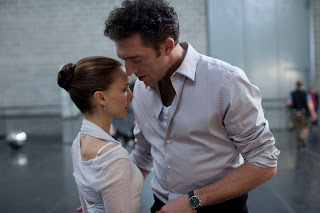 As in The Red Shoes, the film’s narrative parallels that of the featured ballet, which is “Swan Lake.” The Swan Queen is Nina, played by an astonishingly good Natalie Portman. Nina is a dedicated ballerina who lives with her mother Erica (Barbara Hershey), a former ballerina herself who is equally dedicated to Nina’s career (if fanatically so). Marked by her pink-toned bedroom and piles of stuffed animals, Nina’s still very much an innocent – a sweet girl, if you will permit.
Nina’s incorruptibility is also a hindrance, though, when she fights for, and eventually wins, the lead role of the Swan Queen in the ballet company’s revival of “Swan Lake.” The company’s artistic director, Thomas (Vincent Cassel), feels that Nina is holding back in her performance and will never achieve the duality the role requires unless she unleashes her inhibitions. At this time, Nina finds herself preoccupied with the company’s new girl, Lilly (Mila Kunis). If Nina’s innocence signifies her as the pure and traditional white swan, then Lilly is the company’s resident black swan for she is Nina’s polar opposite in terms of confidence and experience. 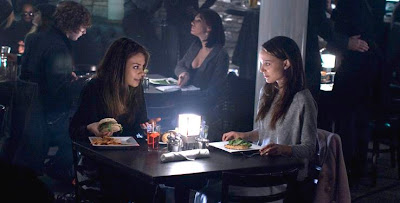 As Nina becomes neurotically driven to please Thomas, she begins to fear that Lilly is out to usurp the lead role. Nonetheless, it’s through Lilly that Nina finds her own dark side. The onscreen pairing of Portman and Kunis is a brilliant feat of casting – the two could be sisters, twins even. Furthermore, Aronofsky enchantingly plays with the doubling of the characters – every time Nina’s paranoia reaches its zenith, Lilly appears, although it could just as well be Nina in darker eye makeup.
The Black Swan manifests itself throughout the film as well. From the feather scarves adorning Nina’s neck to the disquieting ruffles that reverberate through the film’s soundtrack, Aronofsky’s attention to detail is delicious. Likewise, the film’s aesthetic derives from the binaries of the swans, and Black Swan is thus a visual dichotomy of good and evil. Cinematographer Matthew Libatique captures the drama within a dark back drop that ensures an underlying sense of menace in every scene. Likewise, Libatique and Aronofsky have an eerie way of investing Nina’s psychology into her performance (much as Powell and Pressburger did to Victoria Page in The Red Shoes). Using a series of subjective tracking shots and dazzling revolutions, Nina’s determination and anxiety registers even when Portman’s expressive face is off-screen – how they staged so many scenes in front of mirrors is beyond me. Equally laudable is the work by composer Clint Mansell, another frequent collaborator of Aronofsky’s. Black Swan features an overwhelming orchestration of terror and ecstasy, often merged together by the harrowing chords of Mansell’s overtures.

The highest praise, though, belongs to Portman. As Nina, Portman gives possibly the most wide-ranging and dynamic performances of the year. As Nina begins to defy Thomas’s retorts that she’s holding back, Portman pushes herself into the highest of dramatic scales. Portman gives a performance whose maturity and complexity puts her among the most talented of actresses.

Mila Kunis is also a revelation as Lilly. Her bad girl allure demonstrates considerably greater acting chops than her days on “That 70’s Show” hinted at. Vincent Cassel also offers strong work alongside his two star performers, and Winona Ryder is quite

affective as Beth, the reigning queen whose career comes to a dead end following Nina’s rise.  As Erica, Barbara Hershey is an enigmatic and, at times, terrifying presence – Erica’s smothering attitude to Nina’s maturation is one of the film’s most repellent, yet alluring relationships.
Black Swan is quite simply one of those films that are by all regards flawless. A film of dumbfounding complexity and bewildering artistic craftsmanship, there may actually be one word that suffices in my dilemma to accurately describe Black Swan. That word, obviously, is masterpiece.
Black Swan opens in theatres December 1st.
Posted by Pat Mullen at 9/21/2010 12:04:00 PM