Games of Love and Chance

Funny how after Last Night comes another story about infidelity. Whereas Last Night raises a lot of interesting questions about adultery, Love Crime mostly exploits it for a cheap thrill. In this case, the love dance is basically between two parties:  Isabelle (Ludivine Sagnier) and Christine (Kristin Scott Thomas). Sure, Christine’s partner Philippe (Patrick Mille) is involved too, but Love Crime is hardly a love triangle.
The risky business begins immediately when, in the opening scene, Isabelle is working at the home of her boss Christine, and Christine makes a pass at her. Isabelle passes aside Christine’s effort, but her boss persists as their relationship becomes more involved and intimate. To complicate things, Isabelle is the rising star of the company, until Christine takes credit for her much-praised work. To thicken the plot, Isabelle is also sleeping with Philippe. From this affair comes much of the thrill of Love Crime: although Isabelle is physically involved with Philippe, she is enamoured with Christine both mentally and emotionally. Moreover, Christine is fully aware of Isabelle’s affections, and she takes a twisted hold over protégé. 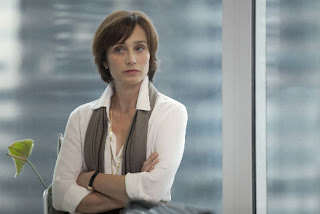 For the first forty minutes or so, Love Crime is a gripping psycho-sexual drama. As Christine, Scott Thomas is marvellously unhinged – her character is so deranged and domineering that she could be Annie Wilkes in a chic Chanel suit. Christine’s manipulative affair with Isabelle is much like watching a cat bat a mouse around before it goes in for a kill. Then things take an abrupt turn.


Love Crime quickly devolves into an ludicrous detective-thriller. As the film progresses, it becomes increasingly preposterous. Worse, once Scott Thomas exits the film, it loses all of its momentum. This is not to say that Sagnier can’t carry a film – far from it. In fact, the only redeeming quality of the last half of the film is her performance, which implores us to discern when Isabelle decided to stop being a victim. 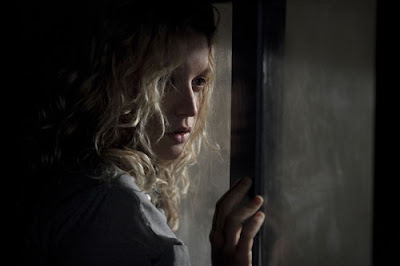 The characterization of Isabelle is problematic, though, in terms of engaging our sympathy with both her and the film. The more we learn about Isabelle, the harder she is to like. Further complicating the matter is how readily the film conflates Christine and Isabelle’s instability with their sexual inclinations. Moreover, it’s difficult to buy in to the contrivance of Isabelle’s legal proceedings when the full extent of her guilt is made explicit beforehand. Apparently, France has the most relaxed legal system on the planet…
The only crime of this partially taut thriller is how much it stumbles after beginning so well. By the end, one is more apt to roll one’s eyes at the denouement, rather than buy into the great “A-ha!” moment to which Love Crime obviously aspires.