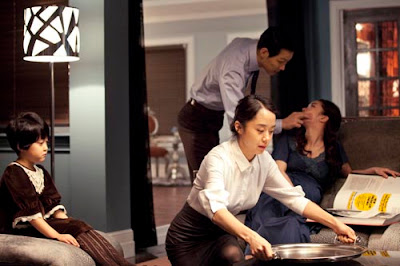 Few films open with as brilliantly ambiguous an opening sequence as The Housemaid. A young woman steps out onto her window ledge overlooking a busy Korean market. The camera then abandons the girl and trolls around, taking note of the daily workings of delivery boys, short order cooks, and fishmongers. After she jumps, the crowd’s sent into a frenzy – as are we because we have no idea who she is or why she jumped. However, although no further reference is made to the suicide, the masterful workings of director Im Sang-Soo make the path of the girl’s fate painfully clear.
The ensuing scenes introduce the girl’s replacement, and, by consequence, the film’s next victim. Eun-yi (Jeon Do-yeon) is first picked up by Mrs. Cho (Yeo-Jong Yung). As Mrs. Cho observes, Eun-yi acts a little young for her age. She just assumes that Eun-yi’s slow. Eun-yi gets the job nonetheless, and soon becomes the new housemaid for Hoon (Lee Jung-jae) and his very pregnant wife Haera (Seo Woo). Like the elder housemaid, Hoon and Haera see Eun-yi as a bit of child, but considering how well Eun-yi gets along with their son, they accept her anyways. 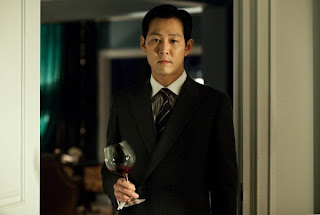 Hoon’s household is a peculiar one. It’s a large empty mansion in which everything is laid out in a masterful motif of blacks and whites, much like the film itself. Everyone in the house is also fanatically consumed with power, from Hoon right down to Mrs. Cho.  Furthermore, one’s higher status is displayed in everything from superior dress, and power resides in the possession of a bulbous wine glass.
Soon, Hoon’s satisfaction with Haera strays when her pregnant state becomes a barrier to his sexual release. Consequently, Eun-yi becomes the object of his desire. Their first encounter is an unnerving abuse of the boss/servant relationship: Eun-yi’s terror is more than evident, but her desire to please her master is equally so. 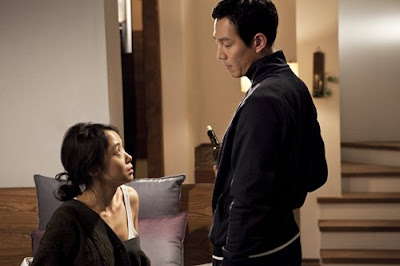 Eun-yi soon becomes naively enamoured with her superior. Their love scenes that follow can hardly be described as conceived out of love, though, as Hoon’s dominance over Eun-yi’s body suggests that his opinion of her has in no way improved since their relationship began. In particular, one of their couplings is violently erotic, but Im Sang-Soo frames the act in a series of ferocious cuts that completely dehumanize the housemaid.
Jeon Do-yeon is a marvel as Eun-yi. It’s an extremely brave performance, and the way in which her character evolves/devolves is truly fascinating. As Eun-yi skips about the manor or assumes the foetal position while sipping a bag of juice, it’s morbidly charming to see just how much this girl is in over her head. Also a marvel to watch is Yeo-Jong Yung as Mrs. Cho. Yeo-Jong gets many of the film’s comedic moments, and it’s intriguing to observe how often Mrs. Cho gets off by asserting her place above Eun-yi. The relationship between the two servants, as well as to their masters, also makes some interesting comments upon class and culture. 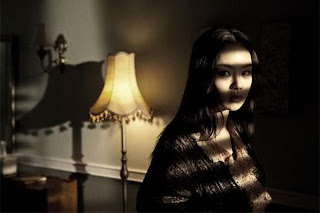 Equally substantial as the story are the efforts of the storytellers. The Housemaid itself is spectacular in its assemblage of atmosphere and ambiguity. Numerous scenes in the film are shot in an imbalanced manner through some well-crafted canted angles – almost every scene of The Housemaid makes Eun-yi’s fate unclear and keeps the audience in suspense. Admittedly, the film is a bit slow at times, but The Housemaid is nonetheless a most visually dense and psychologically taut film.
The Housemaid is a remake of a popular South Korean film from 1960. I haven’t seen its predecessor, but Im Sang-Soo’s film is an alluring piece of suspense and perversion. The whole affair mounts to an unexpectedly defiant, shocking, and satisfying climax. The final scene in which Eun-yi takes control of her fate is perhaps the best money shot this year. You'll feel dirty after watching The Housemaid, but in the good way.
Posted by Pat Mullen at 9/16/2010 05:32:00 PM