Maul in the Family

A Night for Dying Tigers ★★★ 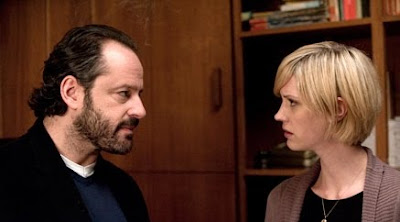 Oh, family get-togethers. They’re probably the best example of the love-hate relationship that exists within all households, be them dysfunctional or “normal.” A Night for Dying Tigers, then, is about the ties that bind - provided that one keeps in mind that “bind” has more connotations than just “connection.”
This first feature by Canadian writer/director Terry Miles is like most family reunions: fun, but frustrating; painful, but cathartic; and endearing, but annoying. The family gets together because Jack (Gil Bellows) is going to prison for five years. His wife, Melanie (Jennifer Beals) is already on the verge of a nervous breakdown, and having to face Jack’s dysfunctional family for a night of smiles and tears is hardly something to look forward to. Nevertheless, she knows that the family is already at a breaking point, and with Jack going to prison, they’re about to lose the one person that holds them all together.
One by one, the siblings and their respective partners make their way to their childhood residence. Both the parents are dead, but the house remains as the solid point of connection for all of them. It’s a reminder of their identities, but the house also harbours the ghosts of the past, which frequently pop up, thus preventing the family from making amends.

Jack’s siblings are an odd bunch: there’s Patrick (Tygh Runyun), a screenwriter who has mostly turned out schlocky, but successful, slasher pics. Patrick’s latest project is an adaptation of the acclaimed novel by their brother Russell (John Pyper-Ferguson). Russell hasn’t had much of a creative output since that novel’s success, and he rides his fading celebrity through a series of mediocre teaching jobs and relationships with his students, including Carly (Leah Gibson), his latest squeeze and date for the dinner. Finally, there’s Karen (Lauren Lee Smith). Karen’s adopted. She’s also crazy. Whether the two traits are related is frequently under debate, but more troubling is her on again/ off again relationship with Patrick. As Melanie says, “She may be adopted, but it's still incest.”
When put together for one booze-fuelled evening, the family’s idiosyncrasies are a little much. There’s too much going on in A Night for Dying Tigers; as a result, the film feels contrived. Miles does, however, have a way of depicting the family dynamic in a way that rings true while the narrative itself often doesn’t. In particular, the family game of charades could easily be a scene from many real-life family gatherings. The way the old ghosts make their appearance in such an innocent game is not improbable. 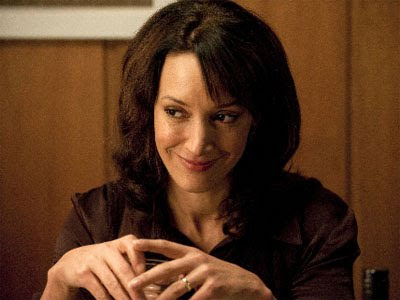 Most of the success comes from the strength of the cast. Jennifer Beals in particular is a standout. From her opening scene in the record store, Beals directs all of the audience’s sympathy towards her fragile character. With her teary eyes and oft-chagrined look, Melanie remains the emotional core throughout. Lauren Lee Smith offers an equally impressive array of emotion – her imbalanced and volatile Karen is as compelling a depiction of mental illness as her supporting role in this year’s Helen. Kathleen Robertson also makes a strong impression as Jack’s girlfriend Jules, while Leah Gibson is a much appreciated comedic presence as Carly, whose charm and naivety diffuse some of the film’s potential heavy-handedness. The quartet of strong performances makes much of A Night for Dying Tigers compelling cinema, though it’s too bad that their male counterparts aren’t as exciting to watch.
There are also a few technical guffaws within the film: the sound is inconsistent throughout and at times, the screen blurs when characters move around in an otherwise static scene, as if the film was haphazardly shot on autofocus. The latter fact is a shame, since the cinematography is otherwise pretty good.
Technical difficulties aside, Terry Miles’s first effort is by and large an admirable one. He astutely captures an honest family portrait, and he also demonstrates a clear ability to elicit solid work from most of his performers. Overall, A Night for Dying Tigers hints at good things to come from a new Canadian talent.
Posted by Pat Mullen at 9/20/2010 10:36:00 PM