Much like 2008’s The Reader, Sarah’s Key is a powerful film that explores the ethical and humanist dilemmas posed by the Holocaust. Like The Reader, Sarah’s Key is based on a best-selling novel (Elle s’appelait Sarah by Tatiana de Rosnay). Sarah’s Key is just as powerful as its cinematic predecessor and it also delivers a retrospective analysis of guilt, innocence, loss, and survival through a dual narrative of past and present.
The past occurs in 1942 Paris, when the French authorities (not the Nazis) began rounding up French Jews and ushering them to the Vélodrome d'Hiver (aka Vel d’hiv). The film frantically begins when the police arrive to remove the Starzynski family from their small apartment. Unsure what to do with her children, the mother hesitates before opening the door. In that moment, Sarah (Mélusine Mayance) locks her little brother in the closet. Assured of his protection, Sarah accompanies her parents to Vel d’hiv, taking the key with her so that she can free her brother shortly after their release.

In Paris, 2002, the Jarmonds move into the Starzynski’s old apartment. Julia Jarmond (Kristin Scott Thomas) is a reporter who happens to be writing a magazine article on the Vel d’hiv affair. Through a series of events, Julia discovers that her new apartment, which is the same apartment in which her husband Bertrand (Frédéric Pierrot) was raised, was purchased by her in-laws in the Summer of ’42 – the month after the Starzynski’s were hauled away. Plagued by guilt and a reporter’s intuition, Julia explores the history of the Starzynski family – she’s writing about Vel d’hiv, after all – and discovers a record that states that Mr. and Mrs. Starzynski were executed after the Jews from Vel d’hiv were transported to the Concentration camps. However, no record exists of Sarah or her brother. Sure that the children escaped the camps and survived, Julia embarks on a global hunt to find the apartment’s rightful owners. 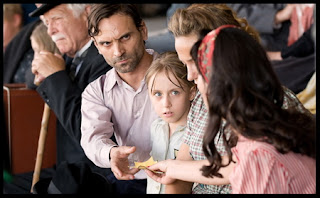 Like any story of the Holocaust, Sarah’s Key is extremely affecting. The first act in which the Starzynski’s endure the horrors of Vel d’hiv is particularly upsetting. As masses of people are herded into a the confined area, the film presents powerful images of what people did to survive – one neighbour actually cuts the insides of her cheeks to fake tuberculosis, as she believes there is a better chance of survival in the medical tents. As the horror mounts, Sarah is increasingly presented with the predicament that she will not be able to release her brother as soon as she expected to. Primarily through Sarah’sendearing perseverance and unrelenting devotion to her brother, Sarah’s Key is heartening story of survival. As Sarah, young actress Mélusine Mayance displays a maturity in performance that far exceeds her ten years of age. It's remarkable how successfully she carries a large bulk of the film’s dramatic weight.

Director/co-writer Gilles Paquet-Brenner succeeds in many regards through his fine attention to detail, as well as the astute parallels that he draws in the past and present narratives. For example, one of the most jarring details of Sarah’s Key is its maximal decibel level in the scenes at Vel d’hiv: Paquet-Brenner said that many testimonies of witnesses/survivors attribute the noise as the most horrifying sensory memory. The scenes in the claustrophobic Vélodrome are, therefore, filled to the max with cries of pain mixed with resounding musical cues to further underscore the chaos of the situation. The effect borders upon deafening, but it’s extremely compelling.
In the present, Paquet-Brenner poses several moral implications of the Holocaust, particularly with regard to Sarah’s fight to live. Julia finds herself pregnant, which is something that she and Bertrand had long since given up hope for; however, Bertrand wants to terminate the pregnancy, while Julia wants to keep it. The incongruity between the attitudes of the Jarmonds and the Starzynski’s is quite troubling, regardless of one’s politics. The film also has an ingenious time structure, which makes it consistently engaging, both dramatically and emotionally.
As Julia, Scott Thomas is as fine as her young co-star. Her work in Sarah’s Key is of the similar understated, but emotionally forceful variety as her career-best work in 2008’s I’ve Loved You So Long. When coupled with her scene-stealing work in Love Crime, Scott Thomas may be the most overlooked star performer of this year’s Toronto International Film Festival. (It also seems that the very best roles for middle-aged actresses do reside in France.) The efforts by Scott Thomas and Mayance, as well as a memorable supporting role by A Prophet’s Niels Arestrup as one of Sarah’s key aids, combine with the clever storytelling Paquet-Brenner to make Sarah’s Key a resonant and genuinely moving reconciliation of the sins of the past.