Not as much to report on this weekend of TIFF. Well, not in terms of technical headaches or celeb sightings, but there were some really great movies. Overall, I think this year's trip to TIFF was even better than last year's. Hat's off to Cameron Bailey, Piers Handling et al for putting together such a great lineup!

I left for Toronto at 12:30 am Friday and arrived at my brother's apartment shortly before 6. I took a quick nap and then did what any logical moviegoer would do after less than four hours sleep: I saw a Holocaust movie. Sarah's Key was a very powerful film and a great way to start the weekend. This French adaptation of the popular novel stars Kristin Scott-Thomas as a journalist investigating the history of one girl's struggle to survive during the Second World War. The film was very well received by the crowd, and director Gilles Paquet-Brenner was on hand to do a Q & A.


I was fortunate to add a screening after Sarah's Key because one of my friends was able to comp me an extra ticket for Oliver Sherman, which is by Ryan Redford, a new Canadian director. Oliver Sherman stars Molly Parker and Garret Dillahunt from No Country For Old Men. In the spirit of "if you don't have anything nice to say, don't say anything at all," all I will say is that Oliver Sherman was a good movie to see for free.
My third movie of the day also happened to be a debut feature for a new Canadian director. However, with The Whistleblower, Larysa Kondracki looks to be someone to watch from the Canadian film industry. First features rarely come as strong as The Whistleblower - I'm actually shocked that this didn't score either of the festivals prizes for Canadian film. Rachel Weisz is also a powerhouse as Kathryn Bolkovac, a UN officer who discovers a human trafficking ring involving many people within her organization. I really hope that The Whistleblower is in the hands of a good distributor so that Weisz and the film will find themselves in the pack come awards time. 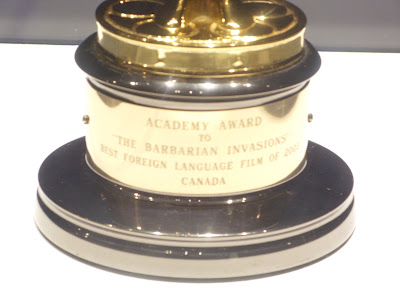 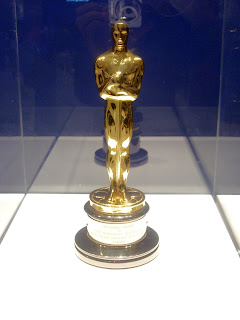 After The Whistleblower, my brother and I explored the TIFF BellLightbox a little. I was very excited when my brother pointed out that Canada's Oscar for The Barbarian Invasions was on display in the stairwell. (It's probably my favourite Canadian film.) We also toured the gallery display of the theatre's "Essential 100" films. There were some pretty neat posters and artifacts from the films, including the camera with which The Bicycle Thieves was shot. I'll admit, though, that pretty much all my appreciation of the display was killed by the fact that Wavelength  made their list of the 100 best films ever made. What idiot picked that? Xavier Dolan?

Saturday had a trio of great films, which I'll reserve most of my gushing for the reviews. First was Rabbit Hole, starring Nicole Kidman and Aaron Eckhart. They're great as a couple dealing with the death of their son. The film isn't nearly as depressing as it sounds - it's well balanced and surprisingly humorous.
Next was the world premiere screening of Last Night. Keira Knightly wasn't on hand, which is too bad, considering that this is among her best work. Stars Eva Mendes and Sam Worthington were there to introduce the film with writer/director Massey Tadjedin. Last Night is a lot of fun, but it's also a smart and subtle meditation on infidelity.

After Last Night, I booked it from the Visa Screening Room to Ryerson theatre. As I rounded the corner, I caught sight of the two hundred people or so who were already in the rush line for Black Swan. Fortunately, I already had a ticket and my brother and our friend were already in the line. Black Swan was easily the best film I saw at TIFF. It's pretty much perfect in every regard!

Sunday yielded two lesser films, although they may have just been victims of the fact that they followed Black Swan. First was Love Crime, a French thriller starring Ludivine Sagnier and Kristin Scott-Thomas. It was really good for the first forty minutes or so, but then become utterly preposterous as it went on. It was one of the films that I had been more excited for, so I was pretty disappointed.

Last was Late Autumn, which we added after exchanging my ticket from the Little White Lies debacle. Late Autumn stars Tang Wei in one of her first roles after she was blacklisted for her work in Ang Lee's Lust, Caution. Tang Wei was pretty good and proved that her phenomenal work in Lust, Caution wasn't just the product of good direction. Late Autumn is a sweet and quirky love story, but I would have liked it a whole lot better had it been cut by about half an hour or so.

I'm sad that TIFF is over, but I look forward to catching up on all the films I've missed whilst I was festivalling - The Town is definitely up first. I'll also have to keep an eye out for the festival's award winners The King's Speech and Incendies (as should you!). I'm glad to be off the festival diet, although I'm proud to report that I branched out from the pumpkin scones and popcorn that sustained me during TIFF 2009.