As the summertime movie season officially draws to a close, I’ve decided for there to be one unrivalled star of the summer: Italy. In July, I am Love made us swoon over Il Belpaese in a glorious ecstasy of artful camera arcs and operatic overtures. Next, in Eat, Pray, Love, Julia Roberts toured through Rome in a gleeful celebration the idiosyncrasies that make Italian culture so intoxicating. Now, with The American, the beauty of the Italian countryside pierces through the steely veneer of this fascinating spy-thriller from director Anton Corbijn (Control).
After seeing the first few frames of The American, it comes as no surprise that Corbijn’s background is in photography. The film has a beautiful emptiness to the staging of the exterior scenes. Perhaps it’s symbolic of the American himself – Jack, an aging hit-man/ arms manufacturer played by George Clooney. Interestingly, Jack’s cover story is that he’s in Italy as a photographer. The American is composed of striking deep-focus landscape shots blended with an array of scenes bathed in arresting artificial lights. The American will probably be enjoyed most as a one-hour and forty-three minute exercise in contemporary photography. 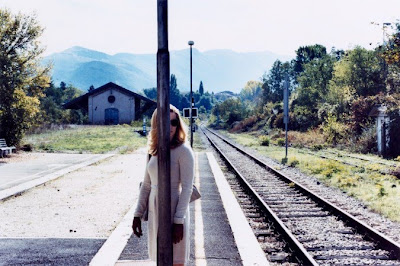 Moviegoers expecting a thriller of the “wham-bam, thank you ma’am” variety will be sorely disappointed. Rather, The American is a slow and methodical film with minimal plot. As Jack lays low in a quiet village in the region of Abruzzo, the tension simmers towards a riveting final act. 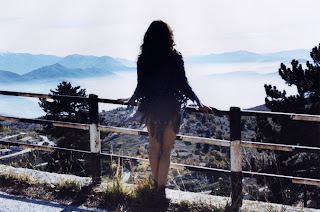 Until the very end, we’re kept guessing at the turn of Jack’s fate: his conversations with the local priest (the superb Paolo Bonacelli) convey a desire to remain hidden beneath the life-vest of his nomadic lifestyle, yet Jack’s encounters with Clara (Violante Placido), a local prostitute, transform him into an old softie. It seems that Jack is ready to atone and quit the job once he becomes enamoured with this hooker with a heart of gold, until he discovers that she carries a gun and has late-night meetings with strange men. 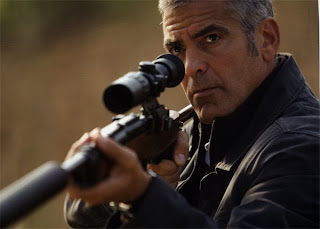 Now that Clooney’s hair is more salt than pepper, his character in The American marks a turning point in his latest string of mature roles. His hard-edged Jack is the antithesis of the suavely coy Jack Foley and Ryan Bingham roles that have characterized his career. Clooney gives a remarkable performance of the quietly nuanced variety.
Perhaps it’s because Jack is such a quiet killer that he’s so interesting. He’s reminiscent of the stoic Man-With-No-Name character of Italian westerns (and we’re made to recognize the point when Jack and a bartender watch a Sergio Leone film). Like most westerns, The American is more about morals and redemption than it is about action. It’s a drawn out affair, but since Clooney and Corbijn consistently hold our attention, it’s a bloody good one too.
Posted by Pat Mullen at 9/02/2010 10:08:00 AM