Who's Afraid of Becca Corbett? 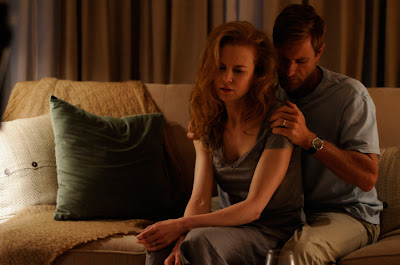 Something remarkable has emerged from the rabbit hole. It seems that Nicole Kidman is back from a long winter’s nap. True, the statuesque strawberry-blonde has been active in Hollywood the past few years, but she’s either been doing her best work in films nobody saw (see Dogville or Margot at the Wedding) or comparatively lesser work in high-profile bombs (see Nine and Australia…though I’m among the three or so people who will passionately defend that film). With Rabbit Hole, Kidman marks a return to form. Not just in performance, but she’s finally found a film worthy of her talents. Quite simply, Kidman and Rabbit Hole are to die for.
Death is also what motivates Kidman’s performance. As Becca Corbett, Kidman plays a mother overcoming her grief from the death of her son in a car accident several months earlier. Becca seems to cope with Danny’s absence better than her husband, Howie (Aaron Eckhart). But is her stoic “life must go on” attitude just a front? Is it a defense mechanism, or is it really possible to move on from grief so quickly? Judging from how seriously she protects her garden, Becca’s still in stage four: depression. 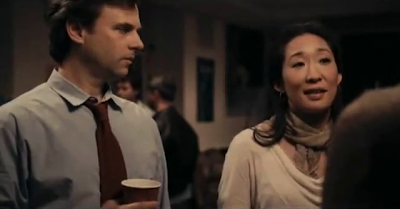 At Howie’s request, the Corbetts make a weekly appearance at a group session for parents mourning their lost children. At the meeting, they meet Gaby and Rick (Sandra Oh and Jon Tenney). They’re the veterans of the group service: they’ve been attending the therapy for eight years. While Howie finds the group cathartic, Becca is mortified at the prospect of becoming a ritualistic griever and she adopts an uninterested rote approach to the therapy.
Becca soon finds her own way to deal: she scoops up Danny’s clothes and shoots them down into the local charity bin. As Becca discards the remnants of her son, and peers down the metal slot and into the abyss, she enters a new dimension. Now, rather than seeming sad or defeated, Becca actively resuscitates her life. However, her self-rehabilitation dramatically affects her close relationships. 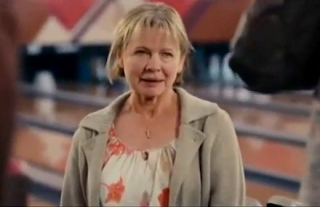 Becca’s “healing” shows itself in acid-tongue irritation to the counsel given by her mother, Nat (Dianne Wiest). Nat tries to console her daughter by discussing how she felt when she lost her own son, yet Becca builds such an impenetrable wall around herself that she’s immune to any support. Unable to seek comfort in his wife, Howie continues to go to group therapy with Gaby. Becca, meanwhile, begins to stalk a neighbourhood boy, Jason (Miles Teller), and the two form a pseudo-support group.
Rabbit Hole is very much a portrait of a family at a breaking point. As Becca and Howie struggle to deal with their grief, it’s traumatic to watch the emotional turmoil spread throughout their family. While the Corbetts’ depression is often contagious, Rabbit Hole isn’t nearly as bleak a film as one would expect. The film is often amusing: particularly in the scenes with Oh’s serial-griever and Wiest’s tee-totalling grandma, Rabbit Hole finds a fine balance between hope and despair (to paraphrase Rohinton Mistry). The humour not only manages to diffuse the awkwardness of the situation, but it adds a sense of optimism to the Corbetts’ situation as well. 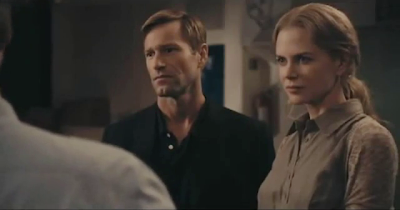 Kidman and Eckhart offer dynamic work as the grieving Corbetts. Kidman effectively exploits the coldness frequently attributed to her characters, thus making Becca an emotional monolith. However, in her relationship with Jason, Kidman illustrates the motherly warmth of her character and offers a glimpse into the pain that eats away at her character day by day. Howie, conversely, is a more outwardly affective character: Eckhart gets enormous opportunities to express Howie’s pain, and he fully invests the father’s despair into his work. Together, Kidman and Eckhart create an absorbing drama of marital hell – particularly in one scene concerning Howie’s video of their son, the acting duo portray a couple so devastating it recalls the masterful work of Elizabeth Taylor and Richard Burton in Who’s Afraid of Virginia Woolf?
Solidly performed by all, the Corbetts’ disintegration is constantly appealing thanks to the fantastic script by David Lindsay-Abaire (adapting his own play) and assured handling by director John Cameron Mitchell. At times, the trip down the Rabbit Hole feels like a descent into hell; and others, it's marvellously uplifting. Either way, it’s worth falling into.

Rabbit Hole opens in limited release December 17. It should make its way to Ottawa by January 14, when the film goes into wide release.