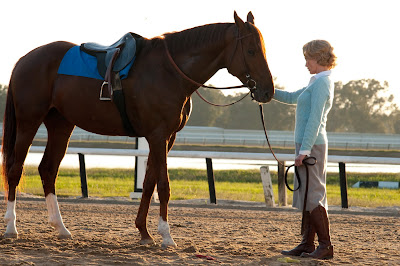 The story of a dark horse unlike any other, Secretariat is a rare underdog story that won me over. The true story of Penny Tweedy, a well-to-do American housewife who bet on an unlikely horse and defied the odds to become the owner of the celebrated racehorse of all time, Secretariat is an unabashedly inspiring drama. However, like the prized horse, Secretariat is all svelte and no schmaltz.
Tweedy, excellently portrayed by Diane Lane, takes over her family stables following the death of her mother. The family horses rouse a passion within Penny that’s been dormant in her domestic years. She soon takes an interest in her father’s horses and sees promise in a yet to be born foal. After researching the horse’s lineage, she gambles on Lucien Laurin (John Malkovich), a retired horse trainer. Laurin’s a flamboyant and eccentric coach, but as the movie informs us, he’s also French Canadian, so it all makes sense.

When the colt is born, Lucien sees immediate promise. Penny and Lucien soon invest all their efforts into whipping their horse into shape. Although the horse gets off to a shaky start, it makes a quick upstart on the racing scene thanks to the team effort of jockey Ron Turcotte (Otto Thorwarth), stable hand Eddie Sweat (Nelsan Ellis) and assistant Miss Ham (a scene-stealing Margo Martindale). It’s also Miss Ham, Penny’s father’s secretary, who submits the name to the racing commission. In a flash as quick as the horse’s hooves, Secretariat becomes horse of the year.
Despite the success, Penny faces much scepticism from the racing community. Racing is a man’s sport, after all. Moreover, she’s not receiving the necessary support from her husband. He acts like she’s neglecting her family, but the film proves just the opposite. Especially through Penny’s relationship with her daughters, Secretariat shows that sometimes the best role models come in unconventional forms. Its Penny’s rise in the racing circuit that the other owners and jockeys seem to fear most: are they afraid of losing to Secretariat, or would getting whipped by a woman be a public shaming? 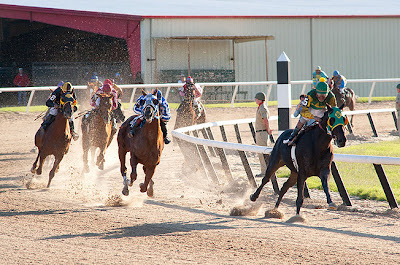 With Penny’s fearless efforts, it’s inevitable that comparisons will arise with last year’s The Blind Side. True, both Penny and Sandra Bullock’s Leigh Anne Tuohy are both White and Socially Privileged mothers who find their calling in the world of sport. Unlike The Blind Side, though, Secretariat has an elevated scale of storytelling and craftsmanship. Cinematographer Dean Semler gets right in the thick of the horse racing scenes, which editor John Wright assembles in a series of kinetic shots. Their combined efforts start the races off with a jolt and reproduce the intensity of the sport through a mix of low angles focussing on the galloping hooves and tight shots of the horses’ heaving muscles. The rest of the film is just as well composed, especially when Secretariat and his team are warmed by the soft morning light. 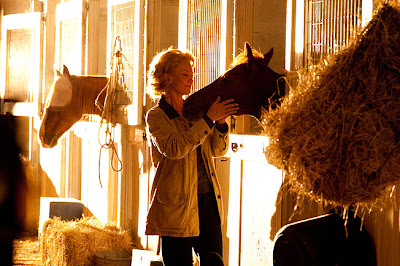 Secretariat also differs from the like of The Blind Side because of the superior work by star Diane Lane. Penny exhibits the sense that she’s in for much more than a horserace, and Lane’s sprightly heroism makes Penny a compelling hero. It’s not just the character - throughout the film, Lane’s tireless eyes convey Penny’s keen observation of the bigger picture, and in turn, she invests a lively all-or-nothing attitude in her work. Lane is well aided by her co-stars, too. Malkovich is a lot of fun as Lucien, but it’s Margo Martindale who shines brightest amongst the supporting players: with her great comedic timing and droll delivery, she’s an absolute hoot as Miss Ham. The horse itself is a winning member of the ensemble, too – its personality registers through more than just the script.

The opening monologue of Secretariat might seem a bit overwrought – the film begins with Penny telling a story from the Book of Job; however, when the film returns to the parable in the final scene, it cleverly encapsulates Secretariat’s importance in cultural history. And Penny’s as well.
Posted by Pat Mullen at 10/08/2010 04:34:00 PM