When it comes to cooking, both my siblings approach the kitchen with commendable fearlessness. My brother is the resident Julia Child of our family. On a whim, he might feel that today might be a good day to make a raspberry, lemon, and vanilla layer cake. No sooner than one can say, “Let them eat cake,” a five layer dessert, made from scratch and soaked with booze, will appear on the table and taste even better than it looks. My sister has an equal zeal to toss things together, but with somewhat less savoury results. She still has not lived down the time she made celery muffins: when our pantry could not produce the cream of celery soup the recipe called for, she casually substituted it with cream of chicken. I’m no culinary expert, but something about that seems off…
After seeing Soul Kitchen, it seems that making a good comedy is a lot like cooking. A good cook will always have an instinct for which ingredients work well together and which do not; likewise, most cooks can whip up something good no matter the ingredients on hand. Fatih Akin’s first stab at comedy is thus a lot like my sister’s chicken-celery muffins – the intentions are admirable, but I’ll pass on a second helping. 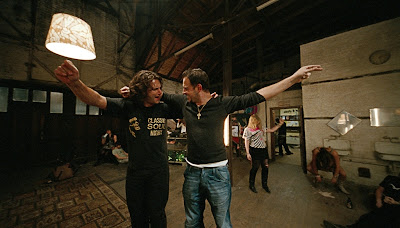 It’s disappointing that Akin’s latest feature is so underwhelming. His last film, The Edge of Heaven, had a complexly structured narrative, an engaging story, and deep characters, all of which came together to create a potent metaphor for the casualties of globalization and the European Union. Soul Kitchen, however, is a predictable and shallow misfire. It’s also just about as funny as The Edge of Heaven. If you saw The Edge of Heaven, you’ll recall that it was no laughing matter. Perhaps the most frustrating aspect of Soul Kitchen, then, is the fact that Akin is visibly out of his element. 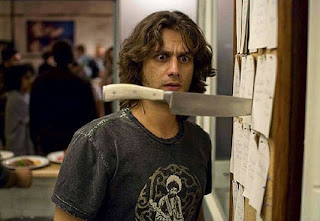 For a writer/director who has displayed an astonishing ability to orchestrate compelling drama, Akin serves up a paltry comedy. Although the production of the film is admirable, the jokes in Soul Kitchen consistently fall flat – both as written and as delivered by some of the cast. Much of the humour within the film is also pretty kitschy: it often relies on wan situational shtick and vulgar jokes. Furthermore, the film also features a heavy dose of stereotypes, which is surprising since the filmmaker has previously demonstrated such a compassionate and astutely conscientious perspective on humanity.
There are some sporadically amusing moments when Zinos (Adam Bousdoukos) slogs around and tries to make his restaurant, Soul Kitchen, the neighbourhood hot spot. Soul Kitchen starts out as one of those “open a box, put it in the deep fryer” dives until Zinos hires a crazy chef to overhaul the menu. The food might get finer, but the film never does, unfortunately. Had Akin been making a half-hour sitcom, Soul Kitchen might have left me with an appetite for more. Instead, a feature length’s worth of scrap ingredients are thrown together with so little inspiration that I lost my appetite all together. Heck, the chicken-celery muffins aimed higher!