Didn't Let Me Down! 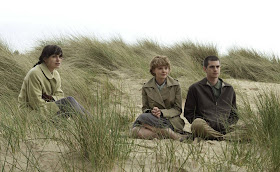 “Students at Hailsham are special,” says Miss Emily (Charlotte Rampling), the Headmistress at Hailsham, which is a vast, cold looking boarding school in the British countryside. The first act of Never Let Me Go follows the days of the students at Hailsham. Their teachers (or “guardians”) grant them so much extra attention that they border on being overprotective. It seems these children are indeed special; however, since the children express themselves so remotely and visitors approach them so awkwardly, something at Hailsham seems a bit off.
Never Let Me Go focuses primarily upon three Hailsham students: Kathy H., Ruth, and Tommy. Like most schoolchildren, the three friends face the typical anxieties of growing up. They get angry, they struggle with athletics and artistic expression, and they worry about fitting in. They also have schoolyard crushes: Kathy is madly in love with Tommy, and Ruth, being an average friend, is jealous.

The unrestrained emotions of the children make a stark contrast to the sombre demeanour of the staff at Hailsham. Until Miss Lucy arrives, it seems that nobody aims to nurture the children’s emotional growth. As Miss Lucy (Sally Hawkins) goes about the daily lessons of Hailsham, she adopts an inquisitive approach to the children’s understanding of the Hailsham curriculum. The more Miss Lucy learns, the more the viewer can discern the devastating destiny of Hailsham pupils. Miss Lucy’s conscience finally gets the best of her, and she makes it clear to the children that unlike most schools, Hailsham does not inspire its students to be all that they can be. 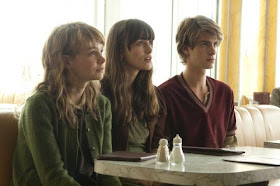 Following Miss Lucy’s departure, the film flashes forward ten years. The three Hailsham kids are now grown up. Kathy (Carey Mulligan) serves as the film’s focaliser and it is through her eyes that we see the emotional and existential complexities that Hailsham hath wrought. Kathy, Ruth, and Tommy leave Hailsham for “The Cottages”, which is a countryside residence at which students reside before they make the preparatory stages for their Hailsham fate: donation and completion. Kathy’s love for Tommy (Andrew Garfield) is still as strong as ever, though now it’s wholly unrequited because he has been claimed by Ruth (Keira Knightley).
Ruth flaunts her relationship with Tommy at every chance. It seems that even though the Hailsham kids have grown up, they are still prone to the emotional shortcomings of all humans. As a result, the relationship of the three friends unravels quickly, and Kathy soon departs to act as a “caregiver” for other students. 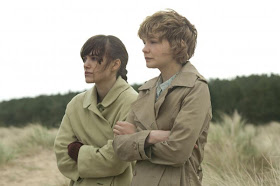 As the years go by, Kathy grows stronger by resigning herself to her fate, but Ruth’s guilt eats away at her. Through the contrast of the friends, Never Let Me Go delivers an affecting exploration of the soul. Director Mark Romanek and writer Alex Garland adapt the film from the extraordinary novel by Kazuo Ishiguro. If Never Let Me Go has any significant shortcoming, it is only that the film is vastly eclipsed by the profundity and emotional scope of the novel. Kathy, Ruth, and Tommy’s story unfolds a bit more subtly within the masterful constructions of Ishiguro’s prose, and thus has a greater impact when their fate becomes apparent. The film, however, makes everything a bit more obvious early on, which mutes the emotional toll a little, but the film still provides a powerful and thought provoking tale.

As Kathy, Carey Mulligan offers a powerful vessel into the film’s examination of humanity. As Mulligan progresses through her character’s sad acceptance of her fate, Kathy’s submission is weighty in its philosophical ramifications. Andrew Garfield (The Social Network) is equally affective as Tommy, the most outwardly sensitive of the bunch. It’s Keira Knightley, however, who gives the standout performance. While Kathy grows into a state of strong acquiescence, Ruth’s vitality slowly fades. Moreover, there is visible psychological and personal erosion to Knightley’s character. In the scenes featuring Knightley’s fine work, the film comes closest to reaching its potential.
Never Let Me Go really only falters in that Romanek and Garland do not tell the story as well as Ishiguro does. They still tell it fairly well, though. They do make some odd choices, however, in what they omit from the novel. In particular, Kathy has a special connection to a cassette that Tommy gives to her during their days at Hailsham. Kathy’s favourite song on that cassette is “Never Let Me Go”, which she listens to endlessly. While the film keeps the song almost solely to grant the film its title, the novel used the song/cassette more prominently to explore the ethical consequences of Hailsham’s curriculum, as well as the emotional turmoil the three friends face. What the filmmakers chose to retain from Ishiguro’s novel is well served, though, if rendered somewhat bleaker. Cinematographer Adam Kimmel lenses the dreary English countryside with a colour-tone that is as dim as Ruth’s outlook on life. Visually, Never Let Me Go is frequently an endless landscape of hopelessness. However, a touching score by Rachel Portman draws out some of the film’s more uplifting moments, so the film is not consistently depressing. This rendering of the story might not be as well balanced, but Never Let Me Go is a very moving production nonetheless. Like the novel, its power lingers long after it ends.