You Will Meet a Tall Dark Stranger ★★★½ 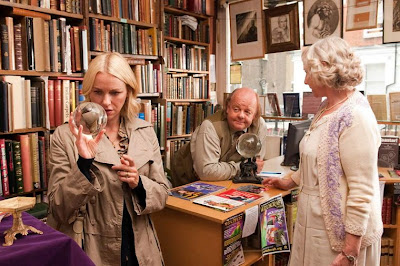 “Why do men chase women? … Why would a man need more than one woman?” asks Rose (Olympia Dukakis) to her elderly skirt-chasing dinner companion Johnny (John Mahoney) in Moonstruck.
“I don’t know,” Johnny replies. “Maybe because he fears death.”
“That’s it!” cries Rose.
No, Moonstruck wasn’t written and directed by Woody Allen, but it seems the Woodman draws the same conclusion as Rose and Johnny. Older men, as we’ve seen in many a Woody Allen film, go after younger girls as if they are a proven elixir for everlasting life. This time around, though, Woody appears to have realized that nothing can prevent the inevitability of death. The tall dark stranger the film refers to is not some exotic love interest, but rather that pale bony figure in the big black robe. 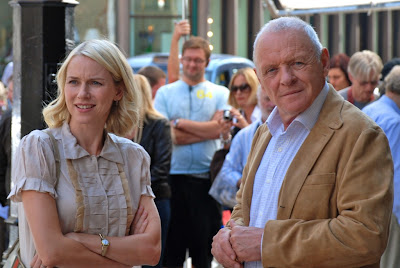 Trying to delay his rendezvous with said stranger is Alfie (Anthony Hopkins). Aptly named for a British playboy, Alfie one day realizes that he is growing old. He does the rational thing and dumps his wife, Helena (Gemma Jones). Alfie tries to rebound by buying a sports car and a posh flat, and he does the sort of ridiculous things that old people do to fool themselves that they’re still young.
Helena, however, seeks solace in a psychic and becomes a little mad. As the narrator says, she becomes the official burden of their daughter Sally (Naomi Watts). Sally’s a woman on the verge of a nervous breakdown, mostly because her husband Roy (Josh Brolin) is a deadbeat sloth. Roy is a one-hit wonder of an author who spends his days rewriting the same shoddy book and living off the charity of Sally and Helena. 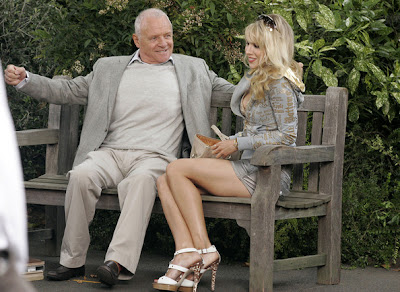 All of the family’s lives are soon upturned by new love interests. Roy finds his muse in Dia (Frieda Pinto) the girl across the street; Sally becomes infatuated with her boss, Greg (Antonia Banderas); Helena falls for an occult bookstore owner (roger Ashton-Griffiths); and Alfie engages himself to a young and pretty bimbo named Charmaine (or as Sally calls her, “Chow Mein”), played by Lucy Punch.  Charmaine also happens to be an actress and part-time hooker.
As each of the characters finds themselves in murky romantic quandaries, what ensue are the typically amusing neuroses of Allen’s musings on love and death. The two greatest mysteries of life are the recurrent themes in Allen’s films, and no filmmaker has as good a handle on them as he does. While Tall Dark Stranger might not be his deepest or most riotous film, it’s still much funnier and more insightful than most other comedies out there.

Allen’s trademark obsequious banter is well served by the stellar ensemble, aside from Frieda Pinto, who is as flat and exciting as cardboard, although she looks great in an assortment of red dresses. Gemma Jones shines as Helena: she certainly gets the most dynamic part and does equal justice to the scenes both funny and sad. Watts and Hopkins are equally fine in roles familiar to most Allen films. Finally, Lucy Punch is a riot as the ditzy Charmaine, who could easily be a distant cousin of the Mira Sorvino character from Mighty Aphrodite.
While the characters and situations might have an air of familiarity to some of Allen’s previous works, the film hardly feels like recycled material. It’s almost as if his earlier ponderings are being re-examined through the mind of a man who has come to terms with the enigmas of life – with romance and mortality still being the most unanswerable mysteries. That the film ends with a fair lack of resolution hints that Allen isn’t ready to sign off on his metaphysical meditations, and that’s one of the film’s charms – You Will Meet a Tall Dark Stranger is as much a learning exercise for Allen as it is for the audience. If life, as the narrator says, “Is just a tale of sound and fury signifying nothing in the end,” that might be okay. As Allen shows, we love, we laugh; we live and we die, and nothing can prevent the inevitable.