The Girl Who Kicked the Hornet’s Nest ★★★★ 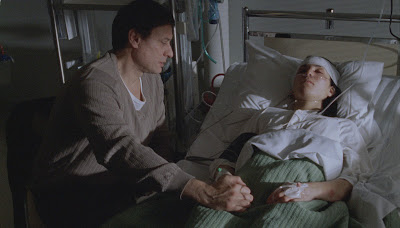 The film version of Stieg Larsson’s Millennium trilogy comes to a satisfying close with The Girl Who Kicked the Hornet’s Nest. The Girl Who Kicked the Hornet’s Nest is, comparatively, the lesser of the three novels, but the same cannot be said of the film. Like its forerunner, The Girl With the Dragon Tattoo, Hornet’s Nest is a film that improves upon its source material. Sure, the Stieg Larsson books are great (one need not go any further than compare the two versions of The Girl who Played With Fire to make such an observation), but the Millennium saga seems especially well suited for the big screen.
With the slick cinematographic eye of director Daniel Alfredson, Hornet’s Nest is both a riveting thrilling and a powerful social commentary on victims of violence and bureaucratic corruption.
Hornet’s Nest picks up immediately where Fire left off. A brief recap of the concluding events is spliced within the opening sequence Hornet’s Nest, but appreciating the film is a hopeless cause for any moviegoer who has not seen the first two instalments. As those who saw (or read) The Girl who Played With Fire may recall, the story of Lisbeth Salander (Noomi Rapace) ended with a bloody climax in which she confronted her maniacal and abusive father, Alexander Zalachenko (Georgi Staykov). Hornet’s Nest begins with Lisbeth and her father being transported to the hospital in police custody. Part three of the Millennium trilogy thus unveils all the secrets of Lisbeth’s dark past as she is brought to court for the string of murders for which she was accused in Fire. 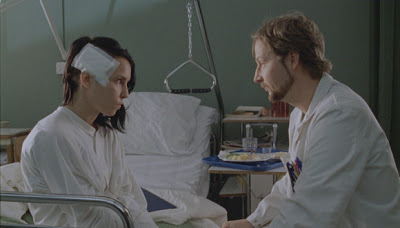 Unlike the film of The Girl Who Played With Fire, Hornet’s Nest doesn’t merely cater to fans of Larsson’s novels. This time around, director Daniel Alfredson and writers Jonas Frykberg and Ulf Ryberg do justice to Larsson’s heroine. Whereas Fire tried to retain all the plot points of the novel, and in the process of doing so undermined everything else in between, Hornet’s Nest simply does away with most of the secondary storylines and minor characters. As a result, the material unfolds quite substantially. Surprisingly, the strongest narrative from the novel, in which Erika (Lena Endre) quits Millennium to become Editor in Chief at a Stockholm newspaper, is done away with altogether. Instead, Erika remains on the Millennium team and assists in bringing Lisbeth’s conspirators to justice. Furthermore, the writers transfer the perilous situations from Erika’s storyline to the greater narrative of the film, thus adding an additional layer of dramatic tension to the story. The Girl Who Kicked the Hornet’s Nest proves that one can make a less faithful adaptation, yet still make a great film. Isn’t that the more important goal, after all? 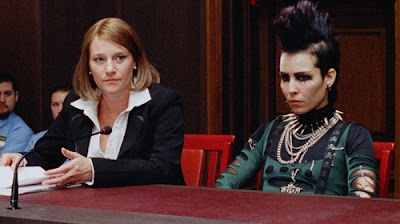 Hornet’s Nest makes up for all the details that were lost in the mess of Fire. The first few scenes spell out the most crucial plot details and characters, and thus bring everyone up to speed on the living hell that was Lisbeth’s adolescence. The most important baddie brought into the fray in Hornet’s Nest is Dr. Teleborian (Anders Ahlbom Rosendahl). Teleborian appeared briefly in Fire as the sadistic psychiatrist who committed Lisbeth to an institution when she was a teen, and then continued to undermine her competency during adulthood. Some slick journalistic work by Lisbeth’s unwavering partner, Mikael Blomkvist (Michael Nyqvist) and his trusty staff at Millennium magazine uncover the extent of Teleborian’s depravity. Blomkvist et al discover that Teleborian is involved with “The Section”, a covert government agency that was responsible for operations involving Zalachenko during the eighties and nineties.
Blomkvist’s investigation unfurls while Lisbeth recovers from her attack and prepares for the trial. As in Fire, the two leads remain in contact mostly via texts and e-mail (as is the norm these days), yet they still make a compelling onscreen team. They also get roughly the same amount of screen-time, so whether you are on Team Sally or Team Blomkvist, Hornet’s Nest is sure to delight. 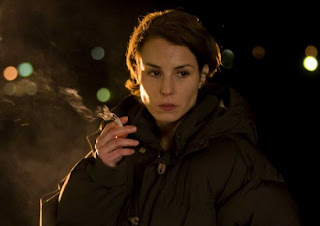 Wait - that’s silly! Everyone’s on team Sally! Just like The Girl With the Dragon Tattoo and The Girl Who Played With Fire, The Girl Who Kicked the Hornet’s Nest is best enjoyed as the Lisbeth Salander show. The greatest treat is to see Noomi Rapace flash Lisbeth’s trademark lopsided smile for the third and final time. Once again, Rapace translates Larsson’s affection for Lisbeth onto the screen. With her steely eyes and brooding stoicism, Rapace perfectly inhabits Lisbeth’s ballsy impassiveness and mischievous spirit. Moreover, when Rapace’s stellar performance combines with the substantial narrative development of her character, the film trilogy regains the thrill of the Millennium novels. Lisbeth Salander is undeniably one of the best film and literary characters of the year. That’s why Hornet’s Nest succeeds so well. By concentrating solely on bringing Lisbeth’s story full circle, Hornet’s Nest equals The Girl With the Dragon Tattoo with how well it embodies the spirit and larger implications of Larsson’s novels.
Posted by Pat Mullen at 10/31/2010 10:55:00 AM