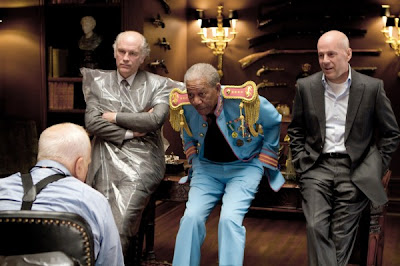 Just a quick one today. Bruce Willis is back in top form in Red, one of the funner action-comedies to hit the screen this year. Unlike some recent hits in which an ageing action star has attempted to prove that he's still a legit action hero (I'm looking at you, Harrison Ford!), Willis and Red succeed because they don't shy away from age. Rather, that's the whole point of Red. Willis's character, Frank, is a retired CIA black ops man who is now RED (Retired and Extremely Dangerous). Frank's pulled out of retirement, though, when a CIA hit squad ambushes his house during the night. 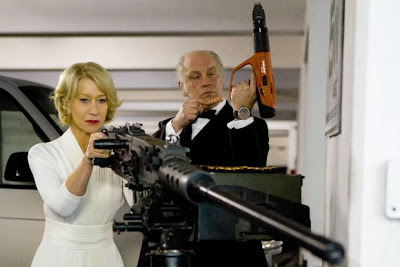 Frank jumps town and decides to get even/ solve the mystery of who tried to whack him. To do so, he reassembles his old secret agent buddies. Like Frank, they're all bored with retirement and are more than eager to go out with a bang. The team's an odd mix of actors: joining Willis are Morgan Freeman (who's done some action-ish films like Kiss the Girls), John Malkovich (he made In the Line of Fire with Clint Eastwood, so Red isn't too much of stretch for him), and Helen Mirren (whose resume is most tailored for the film, what with the wild action sequences of The Queen). The oddball troupe works wonders together, and makes Red a lot of fun. Actually, Helen Mirren makes the action quite dignified, too. Also worth mentioning is Mary-Louise Parker as Frank's new girlfriend. Parker's deadpan comedic flair steals the show.

With its trigger-happy take on ageism, Red is a blast!