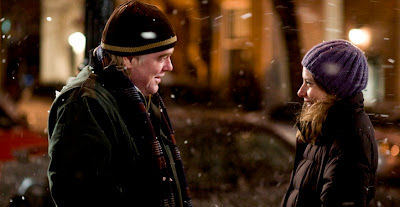 Well, it seems that Ben Affleck isn’t the only actor who can direct a movie these days. Philip Seymour Hoffman makes a very smooth transition from being in front of the camera to behind it. Well, he’s actually performing on both sides of Jack Goes Boating, which makes his work here all the more impressive.
As a director, Hoffman has a personal way of framing the characters and he makes Jack Goes Boating a visually appealing film even though it features minimal camerawork. However, rather than being static or boring, Jack Goes Boating is especially engaging because Hoffman exploits cinematic conventions to manipulate our emotions only when necessary, so it’s highly effective whenever he makes that choice.
It’s appropriate, then, that Hoffman is very much an “actors’ director.” He makes his assured debut by relying primarily on the strength of his cast.

Hoffman’s assembled quite the acting quartet for the film. As Jack, Hoffman offers one of his most restrained performances, but it’s also one of his better ones. Jack’s a quiet and quirky kind of guy – the tight script by Bob Glaudini (adapting his own play) doesn’t delve in to why Jack’s so hesitant to get close to others, but that’s also one of the film’s charms. Things start to change when Jack’s co-worker and best friend Clyde (John Ortiz) suggests that Jack come over for dinner so that he can introduce him to his wife’s friend and co-worker, Connie (Amy Ryan). Connie, meanwhile, is just as shy as Jack, but after much coaxing from Lucy (Daphne Rubin-Vega), Clyde’s wife, she agrees. 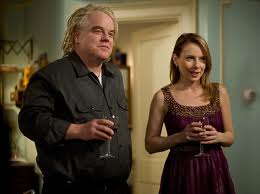 Jack and Connie hit it off at the dinner. Sure, Connie rambles about her dead parents and Jack’s a little too quiet while at the table, but there’s a real spark between them. It’s equal parts strong writing and wonderful chemistry between Hoffman and Ryan that make Jack and Lucy such a charming couple. After dinner, Connie tells Jack about her passion for boating, so Jack proposes they make a date for it in the summer. It’s dead in the middle of winter when he makes said proposal, but it’s sweet nonetheless.
The romance between Jack and Connie slowly blossoms. They’re an awkward couple, but together they learn how to be intimate and overcome their insecurities. As Jack and Connie fumble about in their process of dreamy discovery, it’s incredibly sweet to watch them fall in love. 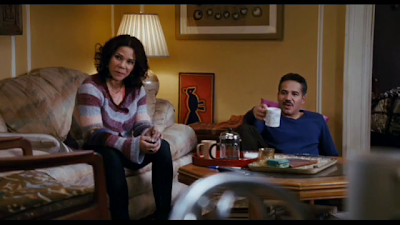 While seeing things develop for Jack and Connie, Clyde and Lucy find their relationship on a downward angle. It seems that marriage has embedded them with the same insecurities that Jack and Connie are learning to defeat. The additional storyline doesn’t detract from Jack’s relationship with Connie because Ortiz and Rubin-Vega offer as lively of performances as Hoffman and Ryan; it’s also much easier to appreciate Jack Goes Boating because sufficient attention is paid to both relationships, as opposed to having Clyde and Lucy’s troubles serve merely as an underlying conflict. The contrast between the two relationships is rather sharp, especially since Hoffman and Glaudini frequent allow the fears of infidelity and commitment to overlap between the two storylines.
Jack Goes Boating is an astute study on learning to love, but also learning to love oneself. That might sound cheesy, but the film certainly isn’t! Rather, Jack Goes Boating is a warm, sweet, and funny romantic comedy whose charm is irresistible.