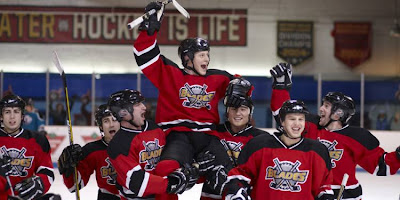 Oh, Canada. Where else can you see a campy, crudely made movie and love it nonetheless? Well, this is the same country whose most famous addition to international cuisine is the combination of fries, gravy, and cheese. Score: A Hockey Musical is actually a lot like poutine – it is cheesy and probably pretty bad for you, but you enjoy every bite.
As one can guess from the title, Score: A Hockey Musical is, well, a musical about hockey. Noah Reid stars as Farley, a sensitive and somewhat nerdy boy with a passion for the ice. His parents (Olivia Newton-John and Marc Jordan) disapprove. They’re a pair of intellectual flower children who think hockey is too violent for their little boy, and would much rather have Farley focus on Socrates than skating. Things change when Farley has discovered by the owner of the Brampton Blades (Stephen McHattie). 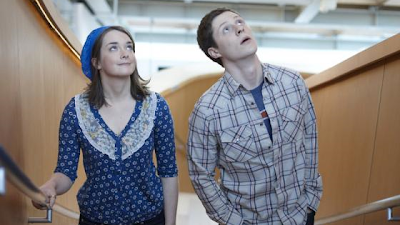 Farley quickly becomes the teen sensation of Toronto’s junior hockey scene. He is swept up in the hype and fame, though, and quickly neglects his studies. Worse, spending more time on the ice means that Farley is spending less time with Eve (Allie MacDonald), his childhood best friend. Farley and Eve both are madly in love with one another, but they are both too shy to admit it. Apparently, they are both afraid to miss on an open net.
Score might feature a cute little romance, but it’s really a love story about Canada’s national pastime. With all its irreverent hockey shtick, Score is unabashedly patriotic. This hockey musical is written and directed by Michael McGowan, whose last film, One Week, was an equally hammy love letter to all things Canadian. Like One Week, Score is full of clichés, contrived situations, and some performances that are as flat as Beavertails. In addition, most of the cast sings just as well as Pierce Brosnan did in Mamma Mia!, but it doesn’t matter. Score works because it pours so much shameless Canadiana into the theatrics – so much that it is not until the ending credits that Score makes its first Tim Horton’s reference! 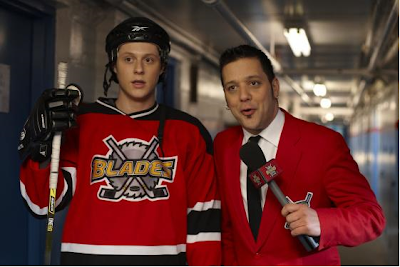 With its sappy songs and goofy situations, Score captures the spirit of the game. Especially funny are the scenes that lampoon the ongoing equation of hockey, violence, and masculinity: Farley refuses to throw punches in the game and instead chooses to quote Gandhi at his opponents. In turn, his popularity with the local hockey hosers drops like a puck because he clearly isn’t man enough for the game. (Somewhere in film studies land, a paper is being written…) When Farley’s teammates drop their gloves and flounce about the rink like the cast of Glee, Score shows  that hockey really is a welcome entertainment for all Canadians. Like the on-ice punches, Score is harmless fun. 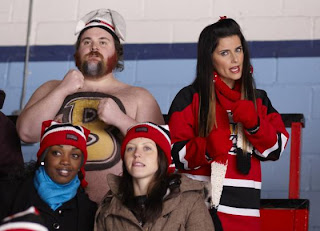 Score also benefits from its two charming leads. Reid and MacDonald offer fun and spirited work, as do Newton-John and Jordan as Farley’s parents. John Pyper-Ferguson is a lot of fun as Farley’s hot-head coach and Score benefits from some fun cameos by George Stroumboulopoulos as a commentator and Nelly Furtado has an crazy hockey-hoser (surprisingly, Furtado doesn’t sing much in the film, but she contributes a song to the end credits). The collective joie de vivre of the cast excels and makes up for the other ways in which the film does not. As a result, the film consistently manages to inspire a sense of National pride. While Score might be a schlocky musical, it is a must-see for all Canadians – hockey hosers or not.