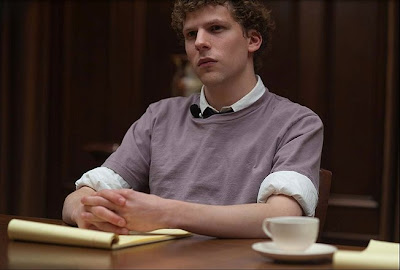 If you take an old story and make it into a movie, does it feel contemporary? Not really, unless the film engages with current discourse or injects a compelling human. The Social Network doesn’t really do either and thus a film with great potential suffers greatly. Although The Social Network catalogues all of the motivating factors behind the creation of Facebook, and astutely satirizes some of the consequences of the social network, it inadequately engages with many of the current concerns regarding the site, particularly its controversial privacy issues. In that regard, the film feels slightly dated, even on the first day of its release.
Secondly, The Social Network lacks an absorbing central character and a persuasive emotional core. Unlike, say, United 93, one isn’t drawn in to this recent headline nearly as effectively. Much of the problem stems from how the film’s anti-hero Mark Zuckerberg (Jesse Eisenberg), the creator/co-founder of Facebook, is a complete ass (for lack of a more delicate term). From the opening scene, Zuckerberg is a smug, self-absorbed jerk. Not that Eisenberg drops the ball; actually, he conveys the complex neuroses of his character quite well, but until the very end of the film, there isn’t a scene in which Zuckerberg can be read otherwise. Throughout The Social Network, Zuckerberg’s arrogance is consistently off-putting. My heart bleeds that he was a bit misunderstood whilst making twenty-five billion dollars, but from what the film shows, he brought it on himself. 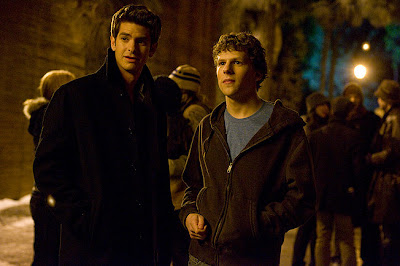 His unlikeability is also debilitating to the narrative drive of the film. As the film chronicles the advent of Facebook, it weaves between two lawsuits. One involves three prestigious Harvard Frat-boys (Max Minghella, Armie Hammer, and Josh Pence) who allege that Zuckerberg stole their idea after they approached him to construct an exclusive online profile network for Harvard students. The other suit against Zuckerberg comes from his best friend from his Harvard days, Eduardo Saverin (Andrew Garfield). Saverin co-founded Facebook with Zuckerberg and was the chief (if not sole) financial backer during the launch and the early days of the site. Saverin charges that Zuckerberg reneged on their deal, forced him out of his own company, and owes him millions. From how the film unfolds, it seems that in both cases, Zuckerberg blatantly screwed his peers – especially Eduardo.
Complicating the matter is how Garfield gives the most winning performance in the film. Thanks to the strength of Garfield’s work, Eduardo is far more accessible emotionally, but that doesn’t help Zuckerberg at all – he just becomes less sympathetic as the film progresses. Justin Timberlake also pops up as Sean Parker, the creator of Napster who hones in on Eduardo’s business end of the Facebook operation once the social network catches on. Timberlake is surprisingly good as Parker: his attention-deficit, wise-cracking juvenile delinquent adds some much needed fun to The Social Network (that’s not meant to be condescending, but you know how most singers are when it comes to acting). 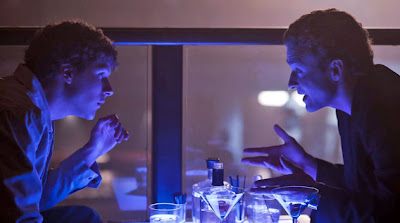 One complaint with regards to acting though: everyone, especially Eisenberg, talks so fast that they belong in an episode of “Gilmore Girls.” It might convey the tension or excitement of the moment in which the characters are living, but the dialogue is frequently incomprehensible. This isn’t helped by the fact that too much is going on with the sound design of the film, and the actors are nearly drowned out by the bass or blaring chords. Even in the scenes that aren’t set in parties or clubs, it’s frequently a strain to understand what the characters are saying. Otherwise, The Social Network is well-assembled to a fault. Rarely has a contemporary film been so inspired in its costuming: Zuckerberg’s tie-hoodie combination and his trademark flip-flops emphasize both his overconfidence and overall sense of laissez-faire. The brilliant cutting of The Social Network frequently demands rapt attention to Zuckerberg’s follies, and the cinematography and score are first-rate, volume levels aside. 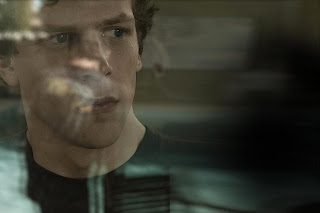 The Social Network should mostly be commended in its portrayal of the Facebook zeitgeist. While Sorkin’s script doesn’t address the recent debates, it does satirize the way in which Facebook overwhelms the lives of its users. Perhaps the best scene in the film is that in which Eduardo’s girlfriend shows up at his apartment and raises hell because his relationship status still indicates “Single.” It’s a scene that’s as true to life as films get.
It’s a shame that The Social Network isn’t as compelling as it should be, given that Fincher and his crew put Zuckerberg’s story together so flawlessly. While some films, like Citizen Kane (to which The Social Network is already being compared) have a likewise flawed and misguided character, Zuckerberg’s fall simply isn’t as captivating because our opinion of him starts at the bottom and fails to rise. The Social Network is an admirably assembled film, but it won’t be making the list of favourites on my Facebook page anytime soon.