The Beat of a Generation 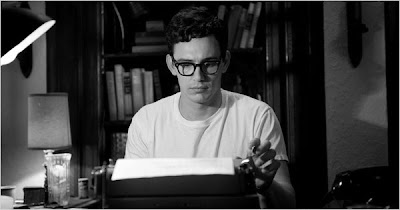 Can the obscene be poetic? No, for as Howl demonstrates, there is nothing obscene in a work of literature that articulates the angst or disillusion of an author, even if the author expresses himself in unconventional ways. Moreover, as Howl suggests, something becomes more poetic when it is said in the idioms and syntax of an unheard voice.
Howl brings to the screen Allen Ginsberg’s highly influential poem “Howl.” When it was first published in 1956, “Howl” caused a sensation on the literary scene – the revolutionary imagery that Ginsberg expressed through a combination of honest emotion and frank words articulated the collective anxiety of a generation of artists. It also sparked an uproar from Americans who felt that its language was too blunt and too coarse to have any literary merit. As a result, Lawrence Ferlinghetti, the publisher of “Howl” was brought to trial with charges of distributing obscene material. 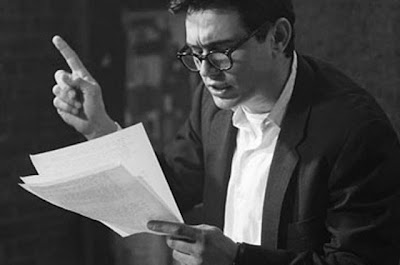 The film chronicles various inceptions of “Howl.” One thread follows the trial as Ferlinghetti’s attorney, Jake Ehrlich (Jon Hamm), defends the literary and social value of the poem against prudish prosecutor Ralph McIntosh (David Strathairn) and before a notoriously conservative judge, Clayton Horn (played by Bob Balaban). Woven through the trial are interviews in which Ginsberg (James Franco) comments upon the perceived obscenity of his work. Ginsberg offers candid moments of insight, as well as deeply personal anecdotes that illuminate the content of his poem. A third sequence features Ginsberg reading “Howl” in a claustrophobic dive in Greenwich Village. Finally, the film depicts Ginsberg in the act of composition: Ginsberg’s keystrokes upon the typewriter give way to an animated sequence that offers a visual counterpoint for the haunting words of his piece.
James Franco is remarkable as Ginsberg. Especially in the scenes in which the poet reads before his beatnik brethren, Franco excels in conveying the staccato beat and urgent frustration of Ginsberg’s “Howl”. He also offers a more introspective side to the artist during the interview scenes, and he has plenty of opportunity to do so, as this facet of the film (like the poem reading) is essentially a one man-show. Howl is much more than a monologue, though.  By inserting numerous reaction shots in which the Greenwich crowd nods, cheers, and sways to the beat of Ginsberg’s reading, writer/directors Rob Epstein and Jeffrey Friedman capture how well Ginsberg spoke to his generation. 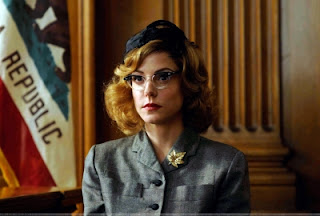 Oddly enough, the best thread of Howl is that in which Ginsberg is absent. The trial scenes of Howl are the most effective in that the offer a wealth of insight not only into the debate of Ginsberg’s literary merit, but into the collective fears and desires for change that permeated the American consciousness circa 1960. Moreover, the clash of values on trial begs one to ask how much things have really changed since. Howl expresses this most riotously in cameos by Mary-Louise Parker and Jeff Daniels as literary scholars denying the value of “Howl”. Their staunch conservatism is sure to inspire the few Tea Party supporters who see the film. The trial narrative is anchored by Hamm’s performance as Ehrlich, whose provocative questioning and ambitious arguments accentuate the importance of “Howl” for Americans. The trial scenes afford Hamm many opportunities to prove that he is quickly becoming the master of the monologue: particularly in his closing argument, Hamm sells “Howl” just as convincingly as Don Draper sells Lucky Strikes. 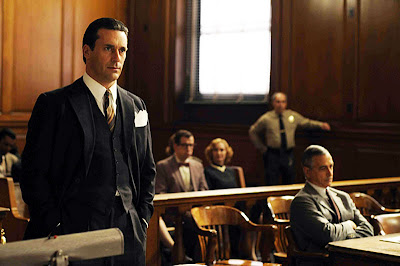 The trial narrative, however, is the only part of the film that has any real drama. At times, the four sequences do not play off one another as well as they should, so the film meanders rather than flows. Additionally, while it’s fascinating to see Franco perform “Howl”, the expressive quality of his scenes are often undermined by how frequently the film reverts to the animated sequence. For a poem with such vivid imagery, the animation is unnecessary and only sporadically effective. Howl, though, successfully conveys the importance of both Ginsberg’s poem and the subsequent obscenity trial. While the film does not match the artistic quality of the poem, it undoubtedly ensures that “Howl” will endure for subsequent generations. If anything, that is a worthy accomplishment.
Howl plays at The Bytowne in Ottawa until November 14.
Posted by Pat Mullen at 11/07/2010 08:10:00 PM