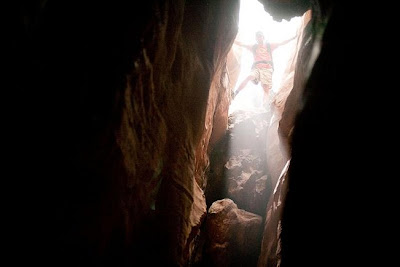 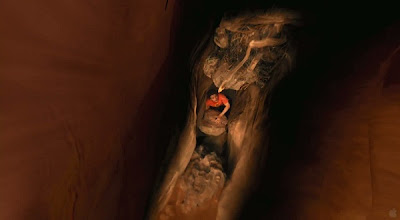 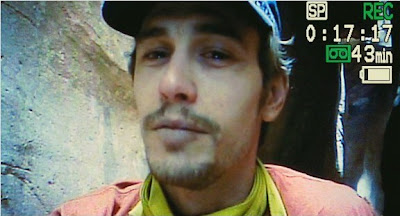 Accentuating the heroism of Ralston’s survival is Boyle’s ability to depict the minor details that both give and take hope from Aron’s situation. Of particular note are the beautiful shots in which Aron gets fifteen minutes of sunlight to warm up: the way the camera captures the light quickly moving across the rocks is but one way in which the natural elements of the setting are exploited to an ominous effect. The film’s greatest moment, though, is bold scene in which Aron decides that the only way to free himself is to cut off his own arm. While many filmmakers would shy away from depicting such a gruesome sight, Boyle holds the shot on Aron throughout the whole ordeal. The physical exertion of Franco’s performance makes this scene unbearably shocking, riveting, and emotionally draining – if you thought watching Charlotte Gainsbourg’s self-mutilation in Antichrist was an ordeal, you ain’t seen nothing yet! Thanks to Boyle’s fearless staging, Ralston’s unfathomable extrication is the consummate moment that defines the film.
127 Hours is easily Boyle’s finest accomplishment as a director. It also marks some career-high work from his collaborators including Franco, Mantle and Chediak, and editor Jon Harris, as well as composer A.R. Rahman, whose score pulsates through 127 Hours with an electrifying beat. 127 Hours is a uniquely inspiring film that is guaranteed to leave you breathless.
Posted by Pat Mullen at 11/30/2010 10:10:00 AM