A compelling tale of family bonds, Conviction tells the true story of Betty Anne Waters (played by Hilary Swank), a working-class American who fought for eighteen years to clear her brother’s name. Betty’s brother, Kenny (Sam Rockwell), is arrested and tried for a string of crimes, the most serious of which is murder. During the trial, the prosecution produces several key witnesses who describe Kenny’s volatility, aggression, and in one case, his admission of guilt. To no surprise, Kenny receives a life sentence.
Always convinced of Kenny’s innocence, Betty embarks on a long and arduous quest to overturn the conviction. The degree of commitment that Betty has for her brother cannot be stressed enough: she goes to law school so that she can defend him herself. As the years go by, and Betty struggles to earn her credentials, both siblings undergo an enormous burden. Betty Anne’s relationships with her husband and, eventually, her children suffer from neglect; likewise, the years take a visible physical and psychological toll on Kenny. 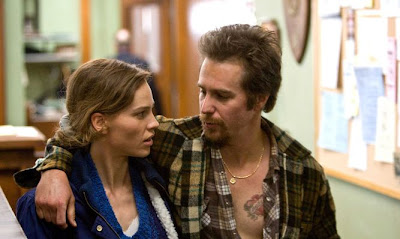 Throughout Conviction, the empathy between Betty and Kenny keeps it engaging. Swank and Rockwell have great chemistry and react to one another with a natural ease and spontaneity – the brotherly/sisterly love feels genuine. Unfortunately, Gray’s script frequently strays from the present day procedural of Betty’s plight. Too often does Conviction rewind to the siblings’ youth. True, the flashbacks give some much-appreciated insight into the terrible upbringing by their mother and Kenny’s history of reckless behaviour; however, the returns to the past frequently serve to emphasize the strength of the bond between Kenny and Betty Anne. It all seems redundant, though, because Swank and Rockwell do such an excellent job at communicating this. At no point is there even the slightest of doubt concerning one sibling’s devotion for the other.
The overuse of the past occasionally bogs the film down in sentimentality, but Conviction is very much an absorbing legal drama. Betty’s investigation reveals some coercion and malicious manipulation from Detective Nancy Taylor (Melissa Leo). Taylor encounters Kenny during the preliminary stages of the investigation, and although he is at first released, it is apparent that his arrogance and machismo rubbed her the wrong way. Conviction might have been stronger with a greater focus on Taylor (she only appears in a few scenes), but that might have also brought the film into the territory of an overwroughtJohn Grisham novel, which Goldwyn thankfully avoids. 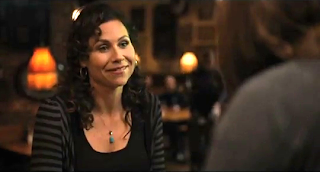 Betty Anne gets some much-needed support from a fellow student, Abra Rice (Minnie Driver). Abra is the complete opposite of Betty Anne, but their relationship proves that good things can happen when opposites attract. As Abra, Minnie Driver is a flamboyant firecracker whose lively banter and impeccable charm really liven up the film.
Like the strength of the Betty Anne-Kenny relationship, much of the drive of Conviction comes from the rapport between Swank and Driver. While scoring as both a family drama and a legal tragedy, Conviction excels most as an ensemble piece. Swank offers a performance with a spunky perseverance reminiscent of her stellar work in Million Dollar Baby, though Betty Anne certainly has a more outwardly visible emotional register than Maggie May. Rockwell probably gives his best work since Confessions of a Dangerous Mind and brilliantly manifests how the strain of the proceedings eats away at his character. While Rockwell plays Kenny as a goofy charmer, he also gives Kenny enough of a brutish dark side so that there is always some lingering doubt towards the merits of Betty Anne’s devotion. Additionally, Conviction features some strong supporting work: in addition to Driver, Leo and Ari Graynor, as Kenny’s daughter Mandy, are extremely memorable. It’s Juliette Lewis, though, who makes the strongest impression in but a brief 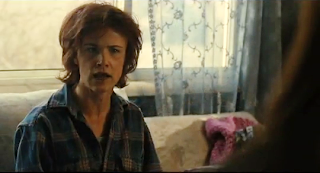 two scenes. Lewis appears as Roseanna, a white-trash floozy whom Kenny dated in the years following the murder. She testifies against him at the trial, but provides some key insight into Betty Anne’s case. In her second testimony, Lewis offers an impeccable range of freewheeling babble and slurring that is marked with extreme moments of twitchy drugged-out paranoia, but also moments of alarming lucidity. The volatile scale of her performance is unforgettable.
The combined strength of the cast makes up for the meanderings of the script and the occasional lapses into sentimentality. Swank and Rockwell ensure that Betty Anne and Kenny never offer a dull moment, even when they seem at the point of defeat. Conviction is ultimately a captivating and inspiring story of, well, conviction.