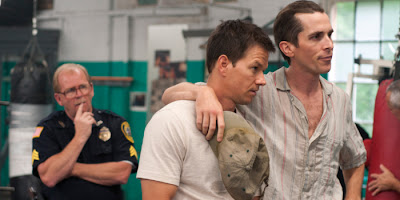 Like Clint Eastwood’s Million Dollar Baby or Martin Scorsese’s Raging Bull, David O’Russell’s The Fighter is a powerful drama about a determined boxer. While The Fighter might not pack as strong a punch as its predecessors, it still manages a hefty wallop thanks to the fancy footwork of director David O’Russell and his outstanding cast.
Based on a true story (which inspirational sports dramas are not?), The Fighter follows the slow rise of Mickey Ward (Mark Wahlberg), a “stepping stone” boxer from Lowell, Massachusetts. “Stepping stone” means that Mickey is basically a punching bag that other fighters use to up their game. The same goes for Mickey’s family: his mother, Alice (Melissa Leo), is his manager, while his brother Dicky (Christian Bale) is his trainer, and they both push Mickey beyond his limits with complete  disregard for interests other than their own. Dicky is also a crack-addict and has-been boxer, and both he and Alice fanatically cling to his glory days. 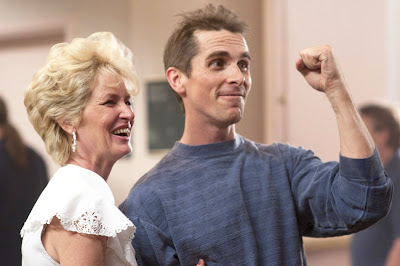 Together, Dicky and Mickey offer a powerful dual of past/present, loser/fighter, and shame/honour. The relationship between the two is the most affecting in The Fighter, and it often carries the film through the scenes where it meanders. Wahlberg and Bale offer contrasting, albeit complementary performances as Mickey and Dicky, respectively. Walhberg’s Mickey is frankly the most passive fighter to enter the ring, but his perseverance and constant devotion to his family grant him a heart that others lack. Like Frankie Dunn says in Million Dollar Baby, “Tough ain’t enough.” To prove, Dicky is all talk and pep, but his reckless antics put both him and Mickey on a seemingly irreparable collision course. Bale offers an energetic and richly layered performance as the often-exasperating Dicky. The explicit binaries of the two brothers make The Fighter far more engaging than most formulaic dramas. 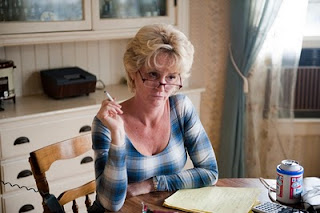 The rest of Mickey’s family, furthermore, is just as bad as Dicky. Alice has seven daughters from a variety of men and, like her, they’re an assemblage of crass-talking white-trash boors who try and mask their vulgarity under a veneer of cheap make-up and peroxide-dyed hair. As Alice, Melissa Leo offers the most complex and fascinating performance of the stellar ensemble – hopefully her work will draw more viewers to her overlooked HBO series Treme. As far as the monsters mamas of 2010 go, however, while Alice does some bad things, sweetie, my vote’s still going for Jacki Weaver’s devious Janine from Animal Kingdom. 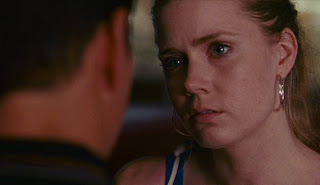 Although Mikey’s family continually hinders his ability to realize his dreams, Mickey finds himself on the path to being a top fighter when he finds his salvation in Charlene, the waitress at the local bar. Charlene is played by Amy Adams in another of her impressive and enormously likeable performances. Charlene’s status as an outsider to Mickey’s family enables her to observe their insanity, and she pleads with Mickey to change strategies. He does and, not surprisingly, it works.
Unfortunately, though, once Mickey starts to find his way, The Fighter loses some steam. As Mickey’s family members voice their discontent with Charlene and try to weasel their way back into Mickey’s career, the film becomes repetitive. The pace of the film also slows drastically during the second act and borders upon dramatically inert. As a result, the dramatic build-up of the early half of the film is significantly muted by the meanderings of the midsection. 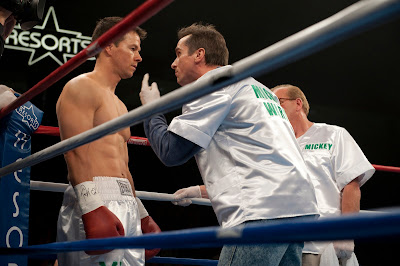 Thanks mostly to the strength of its cast, The Fighter is worth the extra rounds in the ring. Like Mickey, The Fighter starts slow, but ends strong. When Mickey and Dicky finally make peace and the entire family works together to achieve Mickey’s dream, The Fighter regains the dramatic and emotional resonance of the films early scenes. AsWahlberg, Bale, Leo, and Adams work their magic together in the final bout, The Fighter film exceeds said quality as well. As a whole, the film might not be a knockout, but it enlivens an inspiring fight for redemption and survival. When the bell chimes and the credits roll, a rematch is wholly desirable.
Posted by Pat Mullen at 12/17/2010 09:11:00 AM