The Ghosts of Catfish Past

Uncle Boonmee Who Can Recall His Past Lives ★★★★

A few weeks ago, whilst reviewing Hereafter, I lamented the ineffectiveness of several great directors in realizing the afterlife. Well, it seems that Thai director Apichatpong Weerasethakul has done it, and with a fraction of the budget, no less. Weerasethakul’s film, Uncle Boonmee Who Can Recall His Past Lives may be one of the strangest films I have ever seen. It’s extremely difficult to describe. Not so much in the way that Black Swan had me tongue-tied, but more in the way one experiences something like Federico Fellini’s 8 ½, after which you say, “I have no idea what I just saw, but I think I really liked it.”
At its most basic level, Uncle Boonmee is a ghost story. It’s not a scary one, but it is certainly haunting. As Boonmee (Thanapat Saisaymar) spends his last few days of life on his farm in rural Thailand, several ghosts from his visit him past, including his former lover and his long lost son. The ghosts serve not to haunt Boonmee, but more to coax him into accepting his mortality. 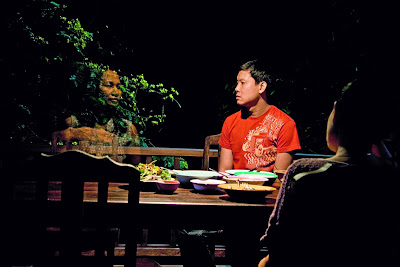 Boonmee’s visits with the ghosts are contrasted with scenes of him and his friend, Jen (Jenjira Pongpas), passing the time via long walks and conversations. Uncle Boonmee is thus a slowly paced film. The long transitional scenes are further drawn out by their minimal camerawork, few edits, and scant score. The film borders upon being taxing – it features a good minute or two of the characters eating honey – but the quietude of these scenes enables other moments of the film to be jarring and profound. The ghosts also appear rather abruptly and in the most inconsistent forms: one looks like a human, while another looks like a close relative of Chewbacca. Either manifestation of the spirits, though, is quite affecting. 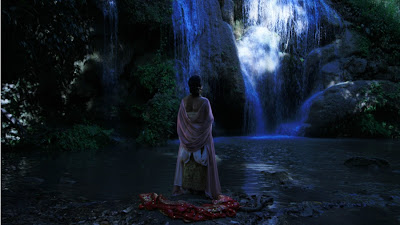 The mash-up in style is also part of what makes Uncle Boonmee such a fascinating oddball. In one sequence, presumably one of Boonmee’s “past lives,” a Thai princess encounters a spirited catfish at a pond. She talks to him for a few moments, and he entices her with a flattering reflection of her beauty. The princess proceeds to strip herself of all her riches as an offering to the catfish so that he can make her attractive… then the catfish has sex with her.
Catfish sex and all, Uncle Boonmee Who Can Recall His Past Lives is an “art film” if there ever was one. Much of my appreciation for it was probably influenced by its triumph at this year’s Cannes Film Festival; however, its absurdity is hard to dislike. Uncle Boonmee is a difficult and demanding film, but also a delightfully quirky odyssey. It’s certainly not for everyone’s taste, although moviegoers who feel up for the adventure are likely to find it very rewarding. Especially if one approaches it with an open mind and two hits of espresso.