Barney Panofsky is a lot like a Canadian version of Henry VIII: he is pleasantly plump and, therefore, a man who likes to indulge in many wordly vices. He also goes through wives like they grow on trees; fortunately, none of Barney’s wives lose their heads, although there is at least one whom audiences might wish she had.
Based upon the 1997 novel by Mordecai Richler, Barney’s Version is an indelible triumph. Taking on the role of Barney is Paul Giamatti. Like the Barney of Richler’s novel, Giamatti’s Panofsky is an uncouth, but loveable lout.  Barney is a culturally savvy TV producer who spends the latter part of his life as a barfly reminiscing on the past. Barney's nostalgia is triggered when a foe from his past, Detective Sean O’Hearne (Mark Addy), publishes a scathing tell-all about Barney’s life. The book alleges all sorts of nasty things, particularly that Barney is a murderer and a reckless Svengali. O’Hearne’s book forces Barney to mine his memories and offer to himself his own version of his life’s story as a corrective to that of O’Hearne. 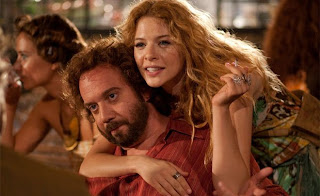 Barney’s remembrances begin in 1970’s Italy. Barney lives the high-life with a troupe of Euro-Bohemian artists, including his best friend Boogie (Scott Speedman). In Rome, Barney also marries his first wife, Clara (Rachelle Lefevre). Clara carries a fatal blend of neuroses and narcotics, and is also visibly pregnant. Barney’s marriage to Clara is short, but hardly sweet. Theirs is a tumultuous and tragic affair and, as his memories suggest, it haunts Barney forever after.
The Second Mrs. Panofsky comes from a wealthy family and she is well endowed with a Master’s degree, whose pedigree she flaunts at every opportunity. It suffices to say that Barney’s second wife is a grating motor mouth. Played by Minnie Driver, the Second Mrs. P is a scene-stealing boor: she’s haughty, pretentious, and incessantly (but ingenuously) annoying, especially when she talksandtalksandtalks without end.

Without the Second Mrs. Panofsky, however, there would be no third Mrs. Panofsky. At Barney’s second wedding, he meets the love of his life: Miriam. Barney is immediately infatuated with Miriam, and his relentless pursuit of her is a romance sweeter than that of the greatest of fairy tales. Played with affection and grace by the radiant Rosamund Pike, the Miriam of Lewis’s film is as endearing as the heroine of Richler’s novel. 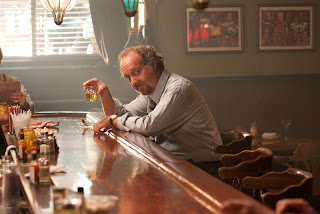 Mordecai Richler’s Barney’s Version is easily among the greatest of Canadian novels. As always with adaptations of a source with such high pedigree, one approaches Barney’s Version with a certain degree of wariness. Fans of the novel need not worry, however, because Lewis’s film does justice to Richler’s masterpiece. The wit and poignancy of Richler’s novel are captured perfectly thanks to the flawless casting of the key roles. Paul Giamatti offers his best work since Sideways and he displays a heart-warming and bellyaching range of comedic flair. It is almost needless to say that due to the strength of Giamatti and the supporting cast, most notably Rosamund Pike as Miriam and Minnie Driver as the arrogant windbag that is Barney’s second wife, the rich spirit of Barney’s Version transcends the novel and makes the film equally memorable.
Barney’s Version is also a very faithful adaptation. The film succeeds because screenwriter Michael Konyves makes no effort to cram all 417 pages of Richler’s novel into 132 minutes of screen time. Instead, Konyves carefully selects excerpts from Barney’s story and develops them quite thoroughly. Konyves also adapts the best and most crucial passages of Richler’s text, so the narrative of the film retains much of the substance of the novel and, unlike some less successful recent adaptations, it avoids glossing over the rich detail of the work in order to retain as many narrative points as possible.

The strongest element of Richler’s novel, the relationship between Barney and Miriam, is executed just as well on screen as it is in prose. Giamatti and Pike offer many memorable moments of quick wit and sweet romance. From their first banter over Monte Cristos, to when Miriam passes to Barney a hockey score on a wedding-reception crib note, to their final dinner date, Giamatti and Pike play off one another marvellously and the love story of Barney and Miriam consistently equals the effectiveness of their characters’ relationship in Richler’s text.
Barney’s Version makes only one major deviation from its source. In the novel, it is not Detective O’Hearne who writes the tell-all of Barney’s life, but Terry McIver, a long-time rival of Barney. Barney and Terry are friends in the early pages of the novel, and their opposition begins concurrent with Barney’s marriage to Clara. The film dispenses with Terry all together, probably for the sake of brevity. While it does no significant damage by having O’Hearne publish the supposed secrets of Barney’s life, the tell-all book loses some power within the narrative because it seems more vindictive than it did in the novel. Additionally, since McIver and Barney remain in contact throughout Barney’s life, McIver’s novel challenges the truth of Barney’s version of the events, as one must question if any of Barney’s close friends are sources for McIver’s book. One can forgive such a change, however, since the strengths of the rest of the adaptation far exceed any minor weaknesses that arise at the expense of omitting Terry McIver.

The filmmakers also strengthen Barney’s Version through their cinematic rendering of Richler’s prose. Using some clever point-of-view shots and close-ups, much of the ribald humour of Barney’s Version is successful, particularly when framing the laudable gaudiness of the performances by Minnie Driver, as well as Dustin Hoffman as Barney’s father, Izzy. Lewis also uses cross-cutting to good effect in order to render the slippages of Barney’s memory, although its use at the end of the film hammers the point a bit too hard. 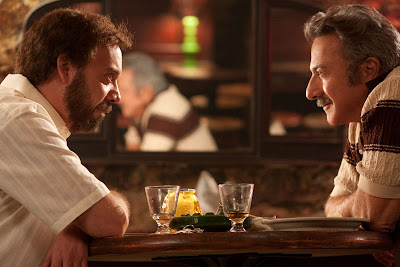