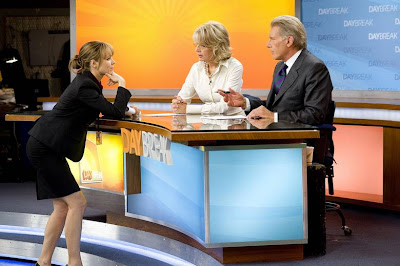 Morning Glory is a pleasant surprise. A warm romantic comedy from director Roger Mitchell (Notting Hill, Venus), Morning Glory is a fun and enjoyable workplace satire. It might not hold up against the likes of say, Broadcast News, but the film is nowhere near as fluffy as it might appear. Like the Nancy Meyers films that always appear in the theatres around this time of year, Morning Appear is easily digestible because it blends clever observations of life within appreciable light humour.
Rachel McAdams stars as Becky Fuller, a type-A workaholic who gets the sack from a successful morning show when the studio opts for people with more business sense and less showbiz savvy. Desperate for any work, Becky accepts the job of executive producer at a crap morning show on IBS (har har!). When Becky arrives at Daybreak, morale and quality are at an all-time low: the co-anchors Colleen (Diane Keaton) and Paul (Ty Burrell) hate each other, the facilities are a wreak, and the staff lacks direction and focus (and decent vocabulary). Becky thus fires Paul and decides to give Daybreak an overhaul by casting respectable newsman Mike Pomeroy (Harrison Ford) to co-anchor with Colleen.

Mike and Colleen prove that opposites don’t always attract. Colleen’s shameless enthusiasm clashes with Mike’s stuffy 6-o’clock-news demeanour, and their toxic relationship drives Daybreak’s ratings further into oblivion. As a result, Becky launches the program further into sensationalism to boost the ratings. With Becky’s fanatical drive to up the numbers, screenwriter Aline Brosh McKenna owes a small bit of thanks to Paddy Chayefsky’s Network. Actually, Aline Brosh McKenna mostly owes credit to Aline Brosh McKenna, since Morning Glory is essentially a rehash of her script for The Devil Wears Prada
To create another odd-couple between the eager young talent and the crotchety old talent, McKenna basically just substitutes Miranda Priestly with Mike Pomeroy. She barely tries to change the names, but, then again, Michael Haneke frequently names his characters Georges and Anne, and we call him an auteur. Oh, the double standards with which we judge mainstream comedy!

The Devil Wears Prada thing works fairly well in the newsroom thanks to the comedic synergy between McAdams, Ford, and Keaton. Rachel McAdams once again proves to be among the most likeable and charming talents in Hollywood. Her dramatic skills also give Morning Glory the extra little oomph that The Devil Wears Prada lacked whenever Meryl Streep was not onscreen. Like the frosty Streep/Miranda, Harrison Ford is wonderful as the cantankerous Mike. Ford is more than apt to play the straight man: His sharp enunciation, deadpan delivery, and inability to crack a smile make Mike an amiable curmudgeon. Ford selectively lets Mike’s guard down in some scenes, so Mike isn’t always the Abominable Snowman of breakfast TV. Finally, Diane Keaton is a real scene-stealer as Colleen. Her spirited interpretation of A.M. TV foolishness is the shrewdest spoof since Jane Lynch’s take on Mary Hart in For Your Consideration. If Diane Keaton had a morning show, I’d watch it every day!
At times, Morning Glory might feel somewhat formulaic and a bit too familiar. Nevertheless, it proves that the power of positive spin always makes for a good comedy. With its smart take on the state of the news industry and its blissful pop soundtrack, Morning Glory is a welcome escape into feel-good fun.
Posted by Pat Mullen at 12/07/2010 01:09:00 PM