Not Such a Holiday Turkey After All... 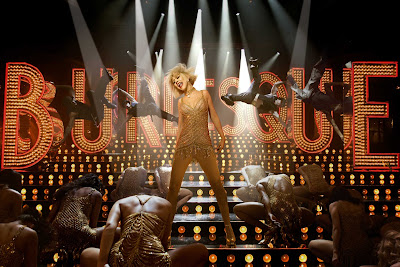 Just another quick one, I’m afraid. I’m not afraid, however, to admit that Burlesque is a pleasant surprise. Burlesque is not exactly worthy of its Best Picture pedigree (although this explains it), but it’s hardly the Showgirls 2 that I was expecting. The film is somewhat lacking in its dramatic scenes, which are predictable. Burlesque also lifts material from Chicago to Coyote Ugly and it throws in an “And I am Telling You I’m Not Going” moment for good measure (though Cher’s “You Haven’t Seen the Last of Me” is probably the highlight of the film). Burlesque is saved mostly, if not entirely, by some great musical numbers and a handful of spirited performances.
Let’s start with Christian Aguilera. As Stanley Tucci’s Sean says, “Great effort, terrible timing.” Aguilera soars in the musical numbers, but the acting portion of her role suggests that she should probably keep her day job. She’s not terrible – as far as singer/actors go, she’s no Britney Spears, but she’s hardly Cher, either. 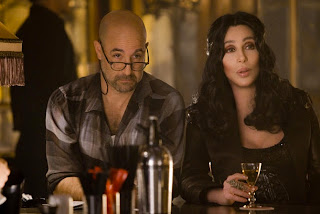 Cher is a lot of fun as Tess, the head Madame at Burlesque. She still sings and performs great, despite a seven-year absence from the screen. The only problem, though, is that her years of Botox and plastic surgery radically undermine her performance. Too often does her usually expressive face look frozen – it’s unfortunate and anyone who has seen Moonstruck knows that she can stretch her emotions much further than her new face allows. Her energy, spirit, and humour, though, remain unscathed.
Overall, though, Burlesque is a guilty treat and a good example of why one should never dismiss a film before seeing it.
Posted by Pat Mullen at 12/21/2010 05:10:00 PM