Now My charms are all O'erthrown 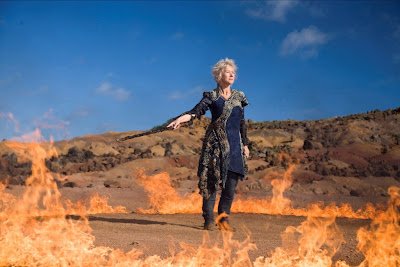 A towering disappointment, Julie Taymor’s The Tempest is a mind-boggling misfire. Taymor made her screen debut with 1999’s Titus, based on William Shakespeare’s Titus Andronicus. Titus is one of the greatest cinematic renderings of the Bard’s work, primarily due to Taymor’s now-trademark visual pallet. The Tempest, however, resembles a catastrophic train wreck far more than Shakespeare’s final masterpiece. One must wonder why The Tempest is such a disaster, though, because the play is the most magical and inventive of Shakespeare’s works and thus presumably the play most well-tailored to Julie Taymor’s authorial style.
The film is not a complete disaster, however, primarily due to the greatness of Helen Mirren in the lead role of Prospera, the former Duchess of Milan. As she was in Shakespeare’s play, Prospera is banished to a remote island after her brother, Antonio (Chris Cooper), usurps the throne. Actually, the phrase “As she was” is not entirely correct, for the exiled sorcerer of Shakespeare’s play is actually a he, not a she. The gender-switch in Taymor’s film works quite well and needs no additional explanation other than that provided in the original verse, save for the alteration of several pronouns. 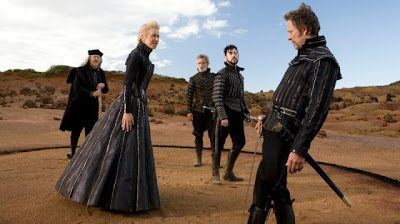 In some ways, the gender-bend almost improves the relationships of The Tempest, for Antonio’s refusal to let his sister reign offers a sharp commentary on the subjection of women in roles of power, which further takes an interesting spin via Prospera’s sorcery. Any debilitation to the play is otherwise muted by the greatness of Mirren’s performance: she displays a masterful grasp of Shakespeare’s verse and articulates Prospera’s many speeches with captivating dramatic flair. Her final monologue in which Prospera conjures up her last spell before she relinquishes her powers is particularly spellbinding.
It is a shame though, that Taymor does not rely more heavily on the strength of Mirren’s performance. It’s also puzzling that she doesn’t, as the alteration of one of Shakespeare’s greatest characters is likely to provoke a flurry of blasphemy charges from Shakespeare purists. Too often does Taymor stray into superfluous superimpositions, quirky camera angles, and unnecessary edits. The overall result is more disorienting than magical. 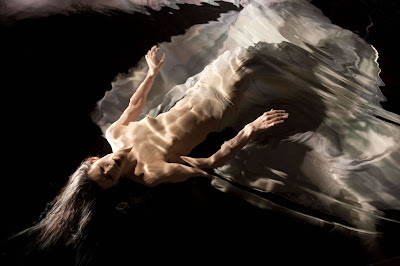 The visual effects are particularly disastrous. Specifically with her rendering of Prospera’s invisible servant, Ariel (Ben Whishaw), does Taymor overindulge in post-production emphasis. Ariel whizzes around the screen as a ghostly superimposition, and he darts back and forth from screen left to screen right with no apparent purpose other than for the sake of drawing attention to visual fancy. Moreover, Taymor redresses Ariel’s nude body in an odd assortment of digital do-ups and appendages. In some scenes, Ariel features a pair of ample breasts that Taymor goes to pains to attract attention. In the following scenes, however, Ariel is flat-chested, and thus his presence results in a distracting game of spot the bosom.
Unlike her work in Titus, furthermore, Taymor’s audacious visuals do nothing to complement the Shakespearean verse. In Titus, Taymor exploits the imagery of Shakespeare’s play, such as references to fire and tigers, or she accentuates the plot with startling visuals, which she does best in the scene in which Titus’s daughter, Lavinia, is violated by having her tongue cut off and her hands supplanted with branches. In The Tempest, however, Taymor’s visuals do nothing to assist the interpretation of Shakespeare’s verse. As a result, they feel unnecessary and thus transform The Tempest into cinematic cacophony. 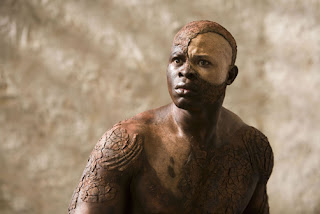 Like the visuals, the performances are equally haphazard. Ariel’s irritating visual presence is rendered more annoying by Whishaw’s grating and overly whimsical performance. As Caliban, Djimon Hounsou wastes the opportunity of one of the play’s juicer roles and reduces it to an overplayed feat whose hamminess is more appropriate for a high school effort than a multi-million dollar Hollywood production. Many of the other supporting players are surprisingly wooden, which plunges the film further into tragedy because Taymor keeps the film at the pace of a stage production and refuses to cut some scenes together. The result is that the film focuses on uninteresting secondary characters for an extensive span of time before returning to the stronger scenes featuring Mirren. 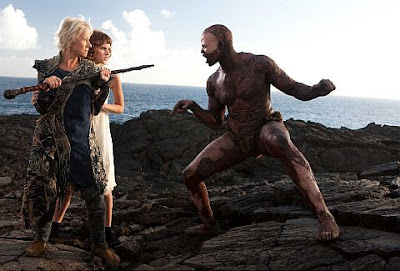 Similar to Mirren’s performance, one must not lament all the efforts in The Tempest. Sandy Powell offers some inspired anachronistic costumes and Judy Chin and the rest of the makeup department create some impressive work, particularly Caliban’s earthy and sun-cracked skin. Unfortunately, though, the positive qualities are overwhelmed by the bombast of the visuals. The greatest flaw, however, is that because Taymor focuses so greatly on aesthetics and so poorly on substance, The Tempest is simply boring. By the end, it feels that rather than recreate the magic of The Tempest, Taymor delivers a tale of sound and fury signifying nothing in the end. Perhaps she should next try her hand at Macbeth.